Acting is my passion; Amankwa Ampofo 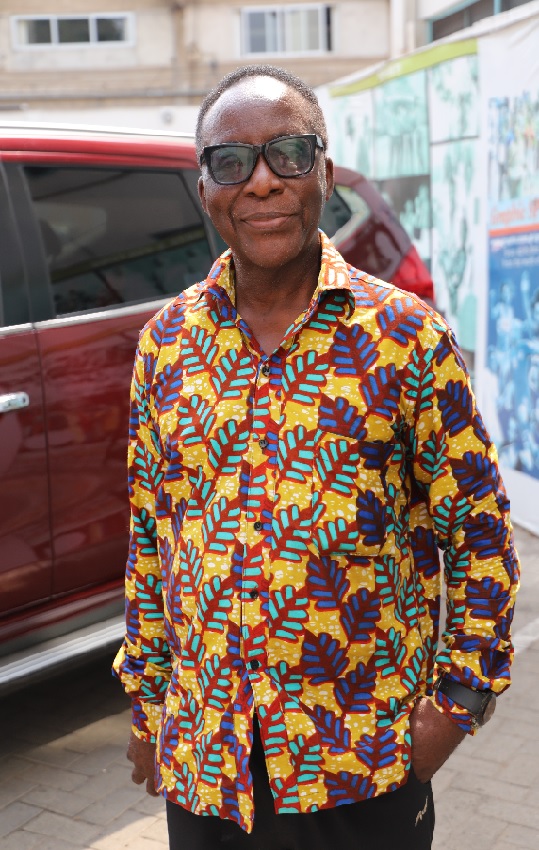 Despite his consistency in entertaining Ghanaians for 50 years, veteran actor and scriptwriter, Mr Charles Amankwa Ampofo of Obra fame, says he is not a “rich man” because money has never been his focus.

He told The Mirror that given the opportunity, he would still act because it is his passion.

“I may not be rich but what I see is that acting has been my passion, and after trying different professions, I have stayed glued to it”.

Popularly referred to as Amankwa Ampofo, the actor who was a broadcaster with the Ghana Broadcasting Corporation (GBC), an English to Akan and Akan to Ga translator said “those days, we were at the GBC for just the name and worked hard for that. The money was secondary.

That aside, I planned with the little I had because I knew one day I would go on retirement. But a lot of my colleagues did not do so and are paying for it today”.

Acting career
Asked how he got into acting, Mr Ampofo, who is now on retirement, said his first appearance on the screen was on May 7, 1971 and that appearance started his acting career.

Amankwa Ampofo (middle) with the late Nkomode (left), and Bob Santo (right), on set during a concert party

He said at age 17, Ms Margaret Addison also known as Koo Karley, a neighbour in Adabraka took him to Mr Emmanuel Mensah Lartey, popularly known as Ataa Mensah, an actor at Adabraka and both “took me to GBC because they saw the potentials in me. When I got there, they asked me some few questions and afterwards they asked me to start with the Radio School before I went on the screens in 1971.”

Prior to this, Mr Ampofo was working at the Cocoa Marketing Board (CMB) as a garden boy and messenger in 1970.

The English-to-Akan and Akan-to-Ga translator and newsreader was involved with the Adabraka Drama Troupe where he performed alongside great actors such as Ataa Mensah.

Just a year afterwards, Mr Ampofo started his media work with the writing of scripts for the youth for a Ga programme called Oblahii Ke Oblayee Abee (Time with the Youth in Ga) for Radio One, then produced by Afodu Fletchyann.

When he joined radio, Mr Ampofo associated himself with the Filaco Fun Club which metamorphosed into the Filaco Drama Troupe, the first group he personally formed with the assistance of the members of the club.

He also wrote for the Akan programme Hen ara nkokonko (just among us), a youth magazine programme.

He became the presenter of the programme.

Amankwa Ampofo and Grace Omaboe of Obra fame, at a drama workshop

The actor taught drama at the James Town One Girls, Anglican Primary, Independence Girls and Ashia Mills schools where he trained the students in their school drama and travelled to different secondary schools to perform shows.

In 1975, James Town One Girls was adjudged the Best Drama School in the Greater Accra Region.

Seeing his contributions were yielding good results, he formed the Kyirem Cultural Group, most of the members were in the basic school and appeared very talented.

He also travelled to Canada with the Obra Group which included Adjoa Smart and Grace Omaboe in 1999 at the invitation of the Ghanaian Community in Canada.

The Kyirem Cultural Troupe at the Kotoka International Airport leaving for the World Youth and Students Festival in Cuba in 1978. Leading then is Mr Charles Amankwa Ampofo

He was formally employed by the GBC in 1982 after working for almost 13 years as an unofficial member. He also became part of GBC’s Keteke TV drama series, written by Nana Bosompra.

The programme later transformed in 1986 to Obra (life) to cover more issues about life.

He was also involved in hosting the popular Key Soap Concert Party programme on GTV.

Amankwa Ampofo and musician Akosua Agyapong at the GBC studio

Mr Amankwa Ampofo set questions for the Agoro TV show which was hosted by David Dontoh.

According to him, Atodu Fletchyann, Kofi Amisah and Amamoo Ankrah (later to move to Sekondi) were the three professionals, who greatly helped him as a young Akuapem boy who spoke pure Akuapem and pure Ga to write plays on all topics in both languages, and listeners had cause to ask for more.

Ingratitude
One thing Mr Ampofo said had affected the industry was “ungratefulness”, noting that it had to stop.
When asked if he regretted doing good to others, he said “no I don’t. I just want people to learn that it is nice to show an act of gratitude to people.”

He cited several instances where he had personally assisted some individuals who are today ‘big men’ but had refused to even say thank you, “and for some, when you call them they think you are going to ask for money so they wouldn’t want to even listen to you. That must stop because it is affecting the industry”.

The 67-year-old indicated that the continuous show of ingratitude in the movie industry was causing those who wanted to help the industry to stay off.

Apart from that, “we have killed the interest for drama, places for the shows are no more, technology has also killed the creativity of actors. But I urge them not to give up.

“One defining moment in my career was when Grace Omaboe in one of the plays was ill but suddenly played her role when the play started. These are the kind of sacrifices we need in our industry today.”

“I remember one time, we needed the sound of soldiers marching in our play, I used some items to quickly create that sound, and we got it perfectly, that is creativity. And that is what we lack in our movie industry today.”

“We should not allow telenovelas to take over our screens to kill our culture. We must be innovative with the view to promoting our customs to the world,” he told The Mirror.

He was honoured for his sterling performance in the media by Conservation International for excellence in radio broadcasting (Biodiversity Reporting) in 2002.

In 2008, the state bestowed on him the Grand Medal of the State of Ghana for his contribution to media development.

Background
Mr Ampofo was born in Accra on July 17, 1953, to Mr John Arthur Ampofo from Antoa in the Ashanti Region and Ms Rebecca Odi Johnson of Obosomase, Akuapem, in the Eastern Region.

After graduating from the Obosomase Presbyterian Middle School in 1968, he sat for the West African Examinations Council’s Common Entrance Examinations, passed and got admission to the prestigious Presbyterian Boys Secondary, then situated at Krobo Odumase, but his father could not raise enough money for the admission, so he abandoned it.

Amankwa Ampofo at home in Accra

Amankwa Ampofo (left) in a chat with former President John Agyekum Kufuor (middle), at a function

GBC sponsored the veteran actor at the Radio Training School in 1988 while the British Broadcasting Corporation(BBC) sponsored him for an Advanced Radio Production course.

He was also trained in Public Speaking at the Radio Training School and attended the Radio Serial Drama Script Writing Course sponsored by the Johns Hopkins University in 1994, among many other courses.

Service in retirement
Even on retirement, Mr Ampofo teaches on part-time basis at the GH Media School, hosts Mbofra mbir on Adom TV, and also provides some consultancy to the GBC.

His experience is also being tapped by the Ministry of Education to introduce programmes in the basic school curricular that would introduce students to Ghanaian culture and values.

As he celebrates five decades in acting, Mr Ampofo intends launching a fund to cater for old and retired actors and actresses in the country.

Taylor Simone Ledward has made her late husband proud. During the 2021 Golden Globes on Sunday, Feb. 28, Chadwick Boseman received the award for Best...
Read more
Entertainment