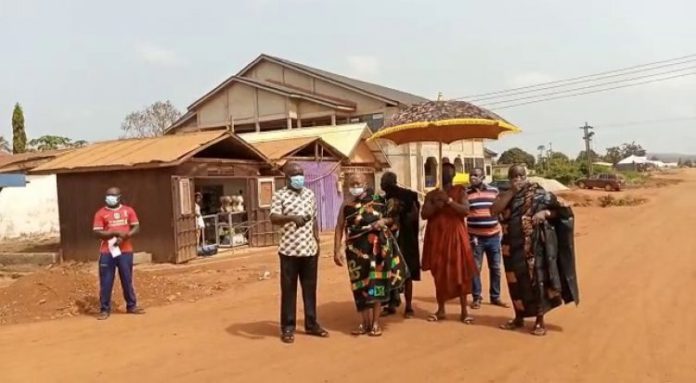 Ahafo Paramount Chiefs have united to stage a protest against government over deplorable roads in the districts.

Authorities of Kenyasi Traditional Council in the Ahafo Region have threatened to mobilise their subjects to hit the streets in the coming weeks over bad roads in the area.

The step is related to the abandonment of the Kanyasi-Hwidiem stretch by the contractor.

The chiefs claim the contractor left the site right after the December 7 general election and has not returned since then.

According to the Paramount Chief of Kenyasi No.1 (Kenyasimanhene), Nana Kofi Abire, the area lacks proper road infrastructure despite being one of the leading gold mining communities in Ghana.

The Kenyasimanhene added that most of the communities around them have been cut off as a result of the deplorable roads.

The Paramount Chief of Ntotroso (Ntotrosomanhene) Traditional Council, Nana Berima Twireko Ampem, expressing his grievance at a press conference yesterday, added the districts have faced a massive retrogression in the economy in the last few years.

The chiefs at the presser declared that they will embark on a massive protest in the impending weeks against the government if the roads are not fixed.

“We are going to hit the streets to express our displeasure over the bad nature of the roads in Ahafo. Our focus will be based mainly on Kanyasi-Hwidiem stretch,” the Ahafo chiefs hinted.