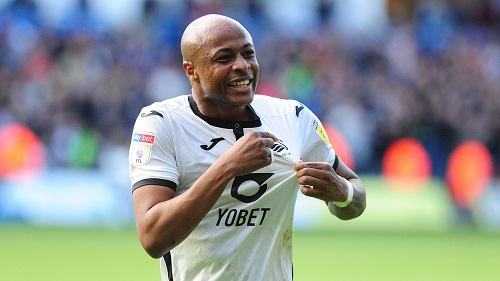 Swansea City vice-captain, Andre Ayew, has described their victory against table toppers, Norwich City as a show of class and character.

Norwich tops the English Championship league log with 55 points while Swansea are third with 53 points.

But speaking to the media after their 2-0 win over Norwich, the Black Stars skipper was full of praise for his teammates insisting that it was a manifestation of the quality they have in the team and how hard they have been working.

“I think it was a very tough game against a tough side, but we executed the game plan really well,” the Swans vice-captain told the club’s media.

“We stayed in the game at all times, we knew we were going to have chances at some periods. “Our throw-ins and set-pieces were very dangerous, we defended well and showed we had character.

“I’m pleased with the victory. It’s a win versus the team who is top of the league and it proves that we have a lot of quality, a lot of character and that we are working hard.”

Ayew’s goal was his first since last December’s win at Queens Park Rangers but the Black Stars skipper was perturbed by his lack of goals.

“Leading from the front, it is always important to get goals,” he added.

“It wasn’t something that disturbed me much because I was playing well and making the team score goals in different ways by my movement.

“I always want to score; that’s for sure, but what’s important is the team and what I’m going to do to help them score – it can be by scoring, by movement, assists.

“I’m happy to get the goal – it’s been a few games without a goal – but most importantly within that period, we were able to win games.

“I feel that we showed we can’t just rely on one or two players and everyone around can chip in with goals and everyone defends.”