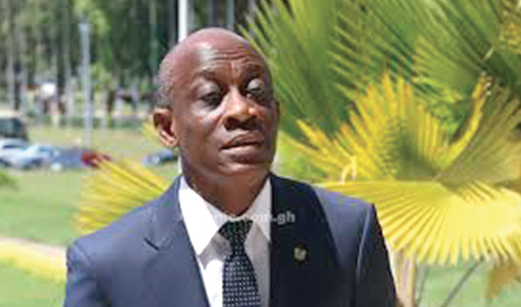 A former Minister of Finance, Mr Seth Terkper, has urged Ghanaians and Krobos in particular to break down partisanship on development projects and with a common purpose drive the national development agenda.

He said development projects, no matter the political administration that initiated or completed it, served Ghanaians and not any particular party and must, therefore, not be politicised.

Speaking in an interview with the Daily Graphic during the commencement lecture of the University of Environment and Sustainable Development (UESD) at Somanya in the Yilo Krobo Municipality of the Eastern Region last Saturday, Mr Tekper said there was no need for anyone to play politics with the university.

He explained that though it was the National Democratic Congress (NDC) administration, led by the former President John Dramani Mahama, which mooted the idea and secured the loan for the project, that was immaterial at the moment. Rather, what was important was that the institution was benefitting Ghanaians.

Mr Terkper said what was necessary as far as the university was concerned was how the facility would serve and benefit society and solve the environment challenges facing the area and Ghana and not who started and who completed it.

He stated: “We have passed that stage in body politicking where parties would claim ownership of state facilities in the name of politics. Let us break down the partisanship because the students are from all walks of life and might belong to all the political parties in Ghana. As much as there could be vigorous debates on politics, which will become a way of life on campus, we should not bother ourselves with this trivial issue of who started and who completed what.”

He added: “The most important thing about the university that should be of much concern to us is its mission to find solution to the degradation of the Ghanaian environment in order to achieve sustainable development. As to who takes credit for the university, the facts speak for itself.”

The former Minister of Finance indicated that the beauty of democracy and a coordinated plan for national development in the life of a nation was that some would sow a seed, some would water it, some would nurture it, some would prune it and some would enjoy successful harvest, adding that that mission would outlive our generation.

He said all the NDC did as a government at the time was to sow the seed that needed watering, nurturing and harvesting to benefit Ghanaians in a sustainable way.

“I personally don’t want to make noise about the university which is ready and is being used now as to who mooted the idea, who purchased the land and above all who passed the law up to the time the university got to this stage. I know for sure that most Ghanaians of different persuasions if not all will keep on paying taxes to keep the university going and not political parties,” the former finance minister emphasised.

Commenting on the major event for the day, Mr Terkper described the lecture as very educative, excellent and precise, something we needed to alert Ghanaians on our attitudes.

He said it was his expectation that the first lecture would guide not only the students but the entire university community and the citizens of the country to be mindful of our attitudes towards our environment.