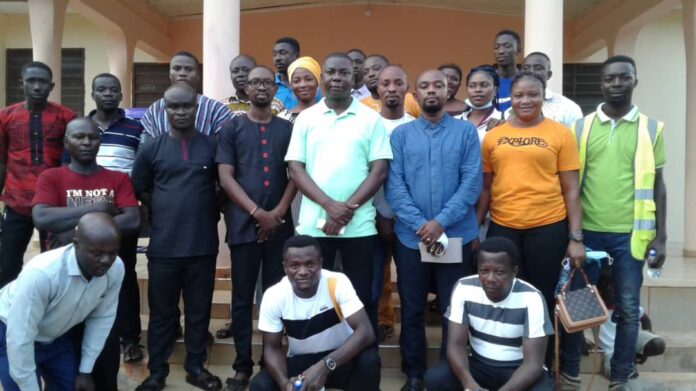 The Technical Advisor and Spokesperson to the Vice-President Dr Gideon Boako has admonished party supporters and grassroots to remain resolute and forge ahead in unity as President Akufo-Addo continues to deliver his mandate to the people.

He has appealed to party supporters and grassroots to unite and eschew hatred, divisiveness and self-destruction as the party targets breaking the eight year cycle in the 2024 general elections.

He disclosed this on Saturday, 10th August at Duayaw-Nkwanta when he was invited by the executives of the “NPP Grassroots Supporters Association in the Ahafo region as part of the agenda of the Association to rekindle the spirit of volunteerism in the party.

Dr Gideon Boako a native of Bomaa in the Tano North Constituency averred that, the New Patriotic Party performed creditably in it’s first term and the grassroots must hold the core in order for the President to deliver his mandate as the party gears towards the next elections.

Dr Boako who has provided numerous supports to the various political actors in Tano North Constituency and across the Ahafo region pledged his unflinching support to the Association.

The Regional Cordinator for the Association in the Ahafo region, Mr Paul Duah called on the leadership of the New Patriotic Party (NPP) to appreciate the work of the grassroot supporters and show appreciation for the work that they do to support the party.

He added that, the party must approach grassroots engagement, not merely as an attempt to appease the grassroots, but rather a sustained strategy for the long-term success of the party.

This, he said, is the surest way of energizing the support base of the party as a way of ensuring a smooth ride ahead of 2024 elections.

Paul Afoko still on indefinite suspension, he has not appealed it – Freddie Blay

Paul Afoko still on indefinite suspension, he has not appealed it - Freddie Blay The National Chairman of the New Patriotic Party, Mr Freddie...
Read more
Politics

• Godfred Yeboah Dame — Attorney General and Minister of Justice Discussants at a post-election stakeholders’ review workshop of the 2020 presidential and parliamentary...
Read more