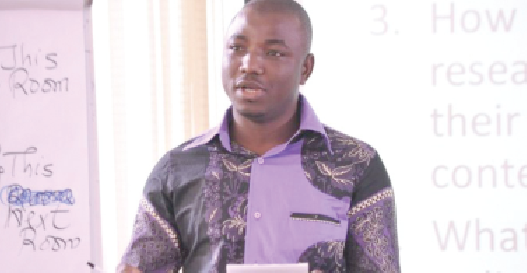 A Senior Lecturer at the Department of Political Science of the University of Ghana, Dr Seidu Alidu, has advised politicians to exercise restraint in their public utterances.

He said it was also important that politicians gauged their attitude and disposition in public.

According to him, the public was always watching the attitude and public statements of politicians and public officers, saying that any untoward comments or behaviour would go a long way to haunt the officers.

“Our politicians need to exercise a lot of restraint in a politically charged atmosphere because anything they do or say will always be remembered by the public at some point in time and they will not be forgiven for any bad attitude they put up,” he told the Daily Graphic in a telephone interview.

His comments come on the back of recent apologies rendered by some Members of Parliament (MPs) and Ministers of State in the public space for comments which they could not substantiate.

At the Appointments Committee of Parliament last week, the Minister designate for Energy, Dr Matthew Opoku Prempeh, apologised and retracted an allegation he made against former President John Dramani Mahama that he bussed students and parents to the Black Star Square on September 17, 2017 to cause confusion during the Computerised School Selection and Placement System (CSSPS) for students.

The nominee, Dr Matthew Opoku Prempeh, told the Appointments Committee of Parliament that he did not have any evidence to prove the allegation that Mr Mahama gave GH¢20 and GH¢50 to some students and parents to go to the square to stage fainting spells and collapse just to make the government unpopular.

The Minister designate for Communications, Mrs Ursula Owusu-Ekuful, was also asked to apologise to her colleague MP, Mr Collins Dauda, for her pronouncements she had made against the latter.

She was also cautioned to be mindful of her choice of words and public pronouncements.

Similarly, the MP for Asawase Constituency, Mr Mohammed-Mubarak Muntaka, has apologised for any harm done to the image and reputation of the justices of the Supreme Court after he alleged that a justice of the apex court tried to bribe a National Democratic Congress (NDC) MP-elect to influence her in the election of a Speaker of Parliament on January 7, 2021.

Dr Alidu indicated that those temperaments and public pronouncements by some MPs were becoming one too many and that was not healthy for the country’s politics, and such individuals would pay for them dearly.

Apart from denigrating the reputation of individuals and groups as a result of such comments, the political scientist emphasised that “the public will also see you as someone who is not truthful and honest”.

“It becomes so embarrassing, even though that is decent politics, for you to eat back your words after denigrating the image of someone or a group after you are confronted in future with the same pronouncements,” he added.

Dr Alidu said that politicians ought to always be guided that the public would always hold them accountable and responsible for anything they did or said, and should be mindful of same.