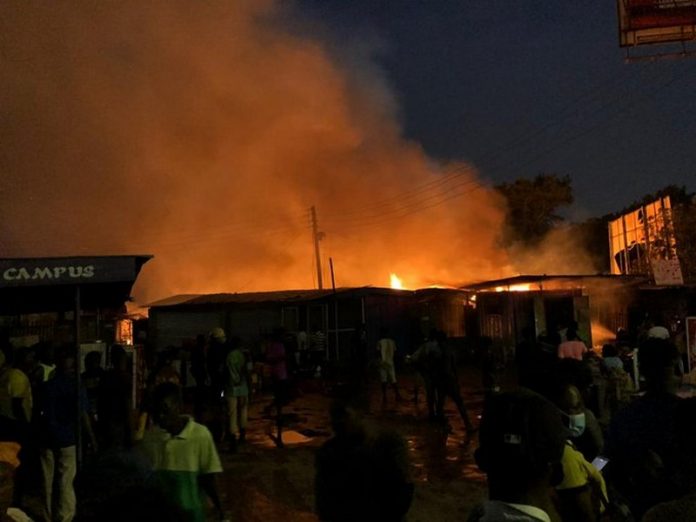 A twelve-bedroom house has been fully engulfed by fire at Sampa in the Jaman North District of the Bono Region.

The fire is said to have started around 3 am, Tuesday.

Two security officers, a police and immigration officer who are tenants, said aside their uniforms, they were unable to salvage any other items before everything burnt to ashes.

Meanwhile, the landlord of the house, Mark Mensah Gazebo said unimaginable amount of money and other valuables were all consumed by the fire.

Some occupants of the house, speaking to Adom News’ Dominic Donyina, attributed the impact of the fire to the Fire Service personnel’s delay.

They alleged that personnel who were called to attend to the fire were waiting for backup after selling the water in the tenders, causing them to delay in arriving at the scene.

The residents are, therefore, calling for a mass transfer of the Fire Service officials for their poor services.

However, the a staff of the Ghana Fire Service has denied the water sale allegations, clarifying the water was used for good purposes.

He said there was water crisis at Nurses Training College’s female dormitory, and with their duty of saving lives and properties, the fire tender was dispatched to the premise.

Reacting to the disaster, the Jaman North Municipal Fire Commander, Evans Ofosu, said the fire was caused by multiple gas explosion but they, with difficulty, put it out after four hours of fighting.