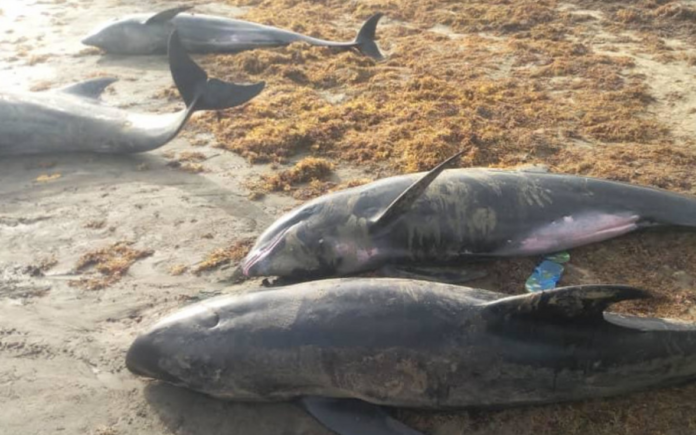 The Fisheries Commission’s preliminary investigations into fishes that were washed ashore on parts of Ghana’s coastal areas were due to stress factors.

According to one of the veterinary doctors of the Fish Health Unit at the Fisheries Commission, Dr. Peter Zedah, tests conducted so far have revealed that the fish kills occurred as a result of stress factor on the side of the fishes.

Hon. Mavis Hawa Koomson, the Minister for Fisheries and Aquaculture Development shared the cause-of-death update on her Facebook page.

Nonetheless, A team of experts from the Environmental Protection Agency (EPA) and the Fisheries Commission has released 38 of the dolphins that were washed ashore at Axim-Bewire last Sunday back into the sea.

However, 25 of the marine mammals that were found dead in the communities have been buried.

Officials said an estimated 120 dolphins were washed ashore alive, but they were weak and unable to swim back to their habitat.

Some people picked 29 of the sea mammals to the communities but a search found all of them dead.

Consequently, 25 of the carcasses were buried, while four were taken to the University of Cape Coast for examination.

The rest of the dolphins, according to the team, could not be accounted for.