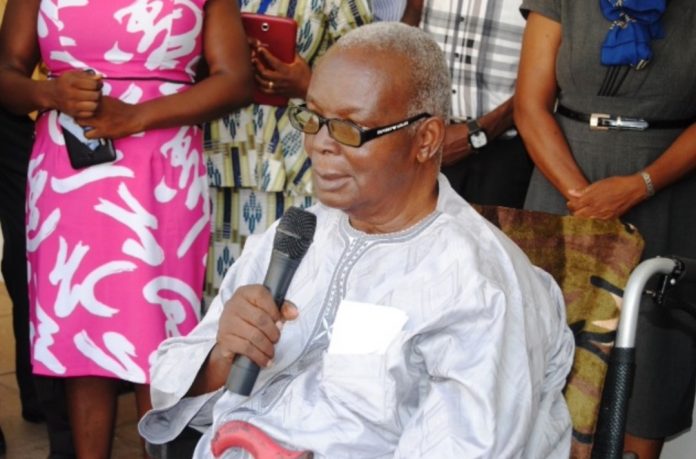 A former Vice Chancellor of the University of Ghana, Emeritus Prof. George Benneh, has passed on.

The 87-year-old died on Thursday at his East Legon residence in Accra.

The news was confirmed by a family spokesperson who indicated that funeral arrangements will be announced later.

The Professor served as Minister of State in the SMC2 regime, the AFRC regime and in the 3rd Republic.

He also held portfolios including Lands and Natural Resources, Fuel and Power and served as Minister for Finance in the Limann Government.

He was also awarded the ‘Star of Volta’ by President John Agyekum Kufuor and was also a Papal Knight of the Catholic Church.

Prof. Benneh was born on March 6, 1934, in the small town of Jamdede, about a kilometre from Berekum in the Brong-Ahafo Region.

His father was Isaac William Benneh, a politician during the First Republic under the Nkrumah government. During his childhood, he spent his school vacations helping out on a cocoa farm his family owned at Prusu.

On the way to the farm early in the mornings, he and his family stopped along the way to have a palm soup meal as the journey was long.

Raised a Catholic, Prof. Benneh had his primary and middle education at the Berekum Catholic Primary and Middle Schools from 1941 to 1949, culminating in the Common Entrance Examination towards the end of 1949.

He studied at Achimota School during his secondary years from 1950 to 1956 where he obtained the GCE Ordinary Level (1954) and GCE Advanced Level (1956) certificates. At Achimota, his nickname was ‘Anago’, an allusion to his athletic prowess.

At the age of 14, while in Form Three, he led the Achimota Athletic Team to compete with Kings College, a notable secondary school in Lagos, Nigeria. He also won the 800 yard-race during the Inter-College Games at the Accra Sports Stadium.

In 1957, he was among four students who were awarded the Shell Ghana Independence Scholarship for university studies at the University College of Ghana, then a constituent college of the University of London where he received a Bachelor of Arts degree in Geography in 1960.

At Legon, he captained the University of Ghana Athletics Team from 1958 to 1959. Between 1961 and 1964, he did his postgraduate studies at the London School of Economics, from where he received his PhD.

Professor Benneh has authored over 13 books and booklets and 70 other publications in Geography, Environment, Land Tenure and Land Use, Population, Education and Public Administration.

Between 1980 and 1981, he served as the Finance Minister and Economic Planning.