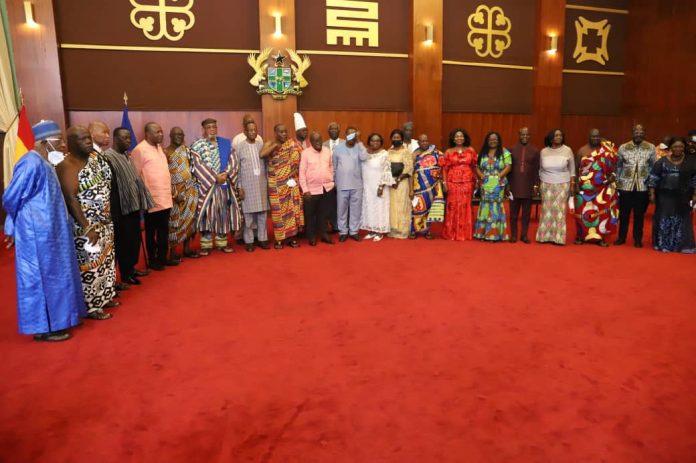 The Chairman of the Council of State, Nana Otuo Siriboe II, has commended President Nana Addo Dankwa Akufo-Addo for receiving “the endorsement of the majority of Ghanaians to continue with the good works”.

“We express our sincere and heartfelt wishes for the success of your next administration which we believe will aim at consolidating the gains you have made in order to leave a lasting legacy”, he added.

Nana Otuo Siriboe II who is also the Omanhene of Juaben Traditional Area commended the President when he presented the third and the final report of the council to President Akufo-Addo at the Jubilee House, the seat of the Presidency.

The 49-page report submitted by the council covers the period between March 2019 and December 2020. The Chairman was at the presidency with the entire membership of the council.

On behalf of the council, Nana Otuo Siriboe congratulated the President on his re-election as President of the Republic of Ghana

“We as a council express our delight in the fact that you received the endorsement of the majority of Ghanaians to continue with the good works. Today’s meeting is probably the last meeting with you since our term comes to an end on January 6, 2021,” he said.

Nana Otuo Siriboe expressed the council’s profound gratitude to the President for his listening ears over the last four years and for his preparedness to meet with the council even at short notice.

“We note with satisfaction that our suggestions and recommendations have largely been accepted and implemented by your government” he added.

He also expressed the seventh council’s gratitude for the President’s cooperation and support as well as the cooperation of Parliament for the passage of the Council of State Act 2020, which had been a lacuna for the council since its establishment pursuant to the promulgation of the 1992 constitution.

The Act, he explained would promote greater efficiency in the work of the council through the appointment of its own staff, control its own budget line, and the regulation of its procedures among others.

He added that for the first time in the history of the council of the Fourth Republic, the council included a retired Chief Justice.

Nana Otuo Siriboe said the council upon assumption of office pledged to produce an annual report on its activities and said it had fulfilled its promise and produced three such reports.

President Akufo-Addo thanked the council members very much “not only for the quality of work that the council has exhibited in these four years but also to the fidelity with which you have carried out your duty and your oath as members of the council of state”.

He explained that there had never been a moment that he sought the advice, the views, the import of the council of state that he found any hesitation on their part or inability to assist him.

“I am extremely lucky as President that I have been very lucky in the way this council of state interacted with me and the Presidency. I am therefore extremely grateful for the cooperation that the council has given,” the President stated.

Receiving the report, he said he had read assiduously the previous report and assured that he would do the same to the third one which continues to contain many suggestions that could improve the governance of the country.

President Akufo-Addo expressed the belief that it was the principal role of the council to suggest to the various arms of government and institutions of the country measures, policies and programmes that can improve the quality of governance of the country, noting that “as far as I am concerned, you have fulfilled your functions admirably”.

“I will like to put on record that the work of this council has been excellent and the people have had their full monies worth your presence in the structure and the institutional makeup of our state and the in the way you have approached your work.

President Akufo-Addo hinted that when things settled down, he would be constituting a new council and some of the old members might be retained although some of the appointments depend on elections.

“I will not find it amiss at all if several of you were to reappear in the new council that was to become. I will find that reassuring,” he said.

The Council of State is a twenty-five member body. Its membership as provided for by Article 89(2) of the 1992 Constitution consists of;

(a) One person who has previously held the office of:
i. Chief Justice;
ii. Chief of the Defense Staff of the Ghana Armed Forces;
iii. Inspector General of Police,

(b) The President of the National House of Chiefs

(c) One representative from each region of Ghana elected, in accordance with regulations made by the Electoral Commission under Article 51 of the 1992 Constitution, by an electoral college comprising two representatives from each of the districts in the region nominated by the District Assemblies in the regions;

The Council is led by a Chairman who is elected from among its members.