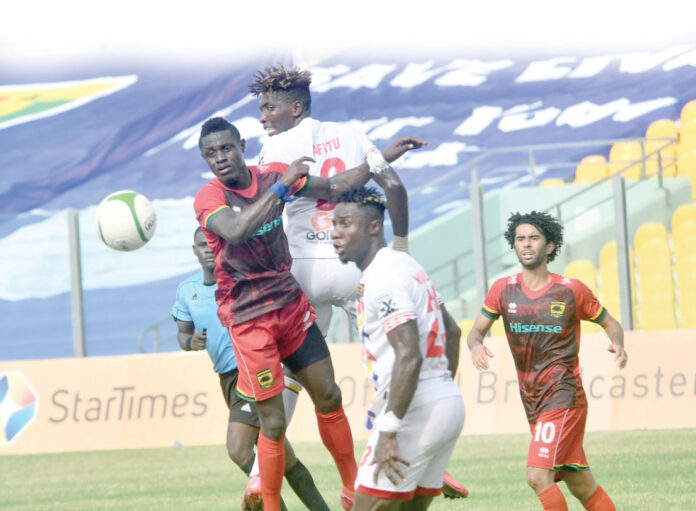 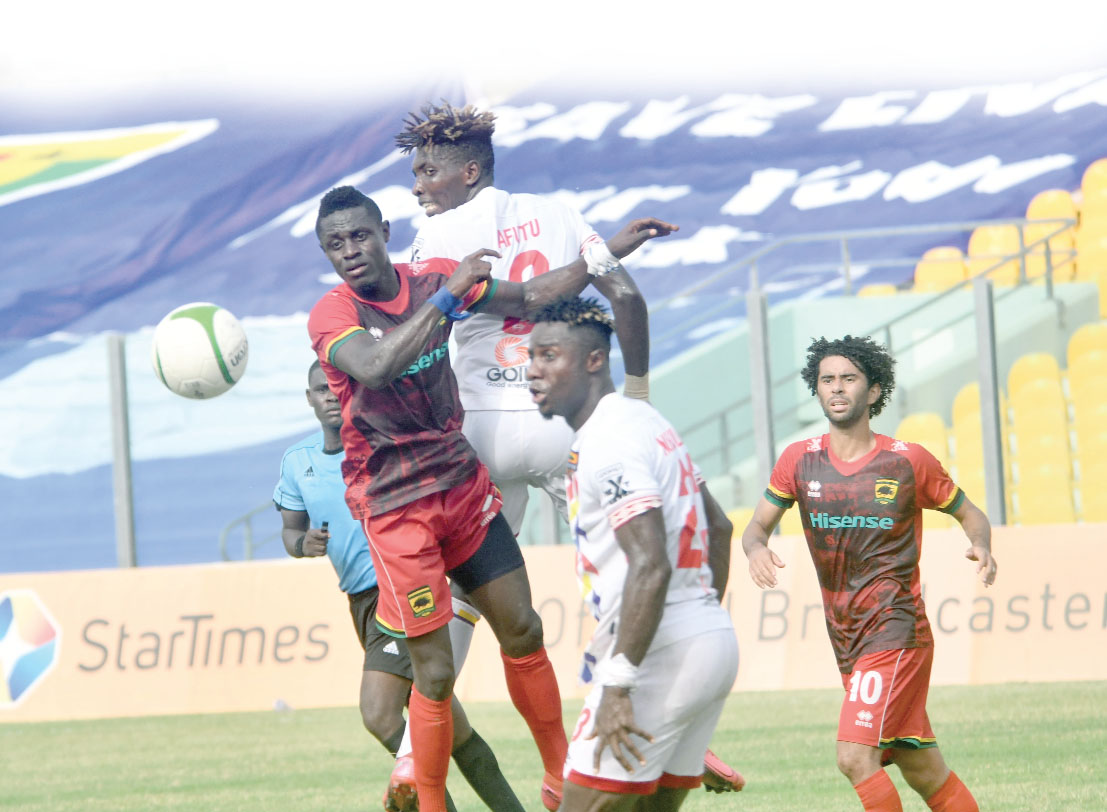 Kumasi Asante Kotoko and Accra Hearts of Oak sold out an exciting game but failed to translate their brilliant display into goals as the match ended scoreless, with the opposing goalkeepers saving a penalty kick in either half on a dramatic afternoon at the Accra Stadium.

Three minutes into the game, Hearts goalkeeper Richard Attah came to his team’s rescue by denying Kotoko’s Kwame Opoku a goal from the spot after a Heats defender hacked down Kotoko’s defender Imoro Ibrahim in a scoring position.

Attah’s rival, Razak Abalora, scored high marks as he stood between Kotoko and conceding many goals, especially in the first half where the Porcupine Warriors came under incessant attacks from Hearts. Five minutes to end the match, Abalora turned hero as he dived to his left to deny Isaac Mensah from snatching a late winning goal for Hearts from the penalty spot.

Played in an empty stadium due to COVID-19 restrictions, the Premier League’s topmost fixture saw Hearts dominating the exchanges and running riot in the first half following Kotoko’s failure to convert the penalty kick for an early lead.

A combination of Emmanuel Gyamfi, Kwame Opoku and Imoro Ibrahim in the third minute saw the latter deep in the penalty box of Hearts, but before he could pounce on the ball, a Hearts defender hacked him down for which referee Bless Selorm Yao rightfully awarded a spot kick.

Opoku was handed the responsibility of putting Kotoko ahead but saw goalkeeper Attah diving full length to his left to grab the ball.

It was a big relief for the Phobians who began to put their passes together and took the game to their opponents and pressed Kotoko to their own half with sustained pressure.

In the eighth minute, Hearts forward Patrick Razak, a constant thorn in the flesh of the Kotoko defenders, meandered his way through a cluster of Kotoko markers and delivered a shot which Abalora dealt with.

Two minutes later, the Kotoko shot-stopper came to the rescue of his side again by denying Hearts’ Frederic Ansah Botchway a goal-scoring opportunity as he stretched to push the ball to safety.

In spite of their superiority, the Heats attackers found goalkeeper Abalora unyielding as he was called to duty to save many sticky scoring opportunities .

Against the run of play in the 35th minute, Kotoko’s striker Naby Laye Keita messed up a chance to put his side ahead after a good combination with Fabio Gama.

After recess, Razak managed to get past his marker Ibrahim but shot wide with Abalora at his mercy. It was another relief for Kotoko who began to sense danger and started soaking up pressure in defence and attacking Hearts from the flanks.

In one of their attacks in the 52nd minute, Keita came close to opening the scoring but Attah came to his side’s rescue with a good save as Kotoko continued to look for ways to get past the unyielding Hearts back line.

As the game was heading for a draw, a combination between Razak and substitute Mensah saw onrushing Abalora tripping Mensah for a penalty. To the relief of his teammates and officials, the goalkeeper rose to the occasion to deny Mensah a late winner to ensure both sides shared the points at stake.