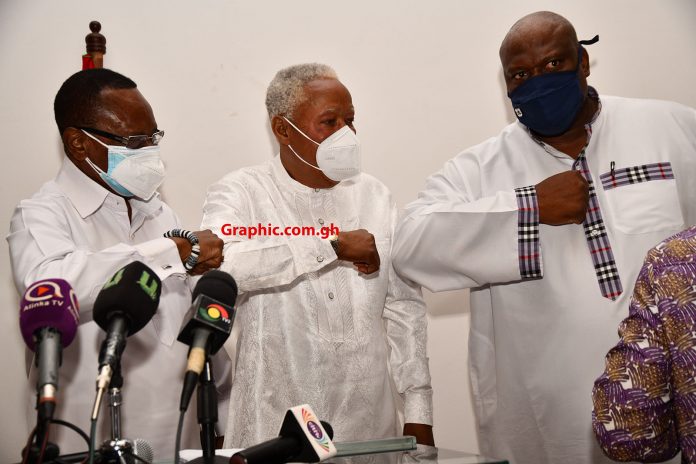 Former Member of Parliament for Ningo Prampram, Mr Enoch Teye Mensah was on Friday given a 100 percent endorsement as the representative of the Greater Accra Region on the Council of State.

Mr Mensah got all the 58 valid votes cast in the election which was held at the Omanye Aba Hall, at the Accra Metropolitan Assembly (AMA) on Friday. February 12, 2021.

He contested the poll with Mr Michael Kofi Mensah, a Managing Consultant and Mr John Mantse Akwetey, a Communication Specialist who obtained zero vote each.

Another candidate, Mr Charles Parker-Allotey, withdrew from the contest minutes before the commencement of the poll while the former Greater Accra Regional Representative to the Council of State, Nii Kotei Dzani, had earlier withdrawn from the race.

There was strict adherence to the COVID-19 safety protocols including the washing of hands with soap, use of hand sanitisers and wearing of face masks.

Fifty-eight persons – 29 metropolitan, municipal and district chief exectives and their presiding members (29), all wearing white attires, cast their votes during the election.

Graphic Online’s Emmanuel Bonney reported that shortly after his election, Mr Mensah, in his acceptance speech, thanked the delegates for the overwhelming support in electing him to represent Greater Accra.

Mr Mensah, a former Chief Executive of the AMA, indicated his desire to contribute greatly to the development of the Greater Accra Region and the country as whole.

The Minister designate for the Greater Accra Region, Mr Henry Quartey, who was present, later told journalists that the delegates had spoken through the election of the person they thought was the best to represent the region.

“We thank God for the smooth process. It was clear demonstration of the beauty of democracy,” he said.

Earlier, one of the candidates who was contesting the council of state election in the Greater Accra Region, Mr John Mantse Akwetey was forced to apologise to delegates and retract comments that sought to give the impression that they might have been influenced by well-resourced candidates.

This was after he was given the opportunity to share his ideas to the delegates on why he was the right choice for the region’s representative.

This comment by Mr Akwetey did not go down well with the delegates who started hooting at him to leave the stage.

Other delegates even went to the stage to take the microphone from him thereby creating some confusion.

With pressure mounting on him to leave the stage , Mr Akwetey walked out of the Omanye Aba Hall, venue for the election with the assistance of security personnel present.

While outside, the Mayor of Accra, Mohammed Adjei Sowah took the microphone and deplored the comments by Mr Akwetey for the allegations he sought to make.

He said the onus lied on him to prove his allegations or withdraw the comments and apologise to the delegates, the other candidates and all those present.

In the course of the Mayor’s comments, Mr Akwetey subsequently came back to the hall to retract his comments and apologised to the delegates and other contestants.

Four persons were due to contest the election for the Greater Accra representative to the Council of State. They comprised former Accra Mayor, Mr E.T. Mensah, a retired civil servant, Mr Michael Kofi Amoah, Mr Akwetey and a former Public Relations Officer of the Ghana Education Service, Mr Charles Parker-Allotey who stepped down at the last minute.