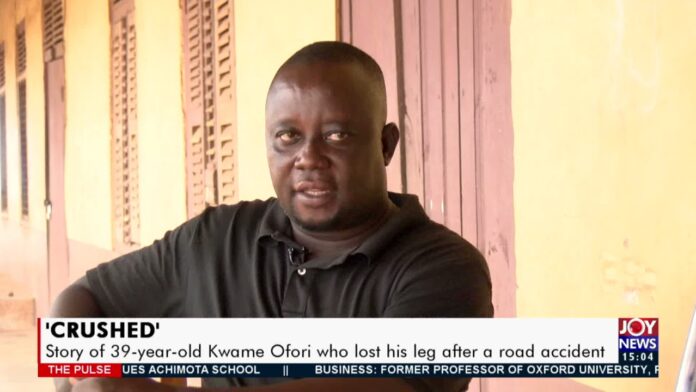 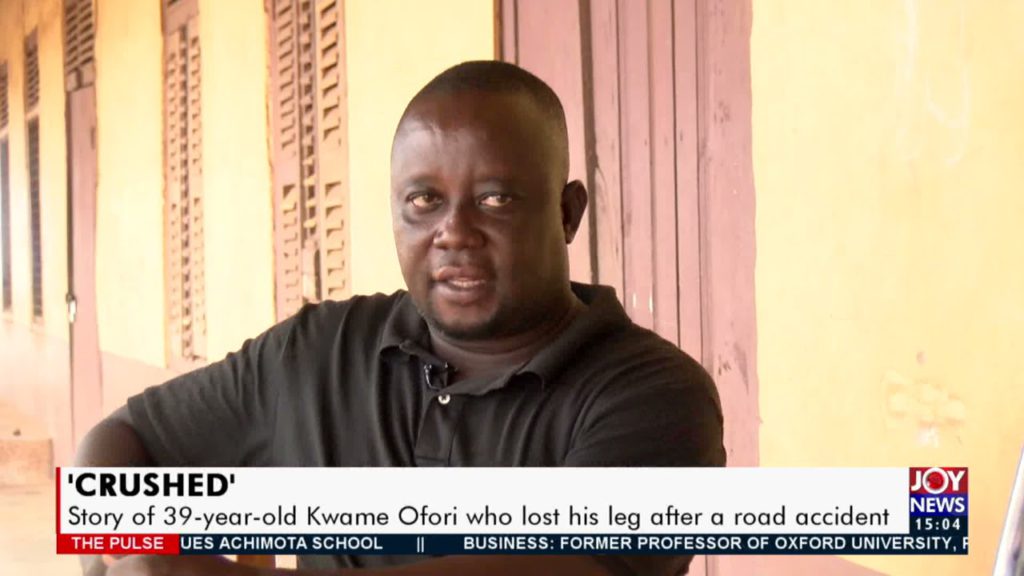 The increasing number of road accidents claiming lives and changing the livelihood of survivors has become an albatross around the necks of some Ghanaians.

39-year-old Kwame Ofori is a victim who has been left amputated following a gory incident after several decades of careful watch on the road.

In a yet-to-be aired Hotline Documentary titled ‘Crush,’ Kwame Ofori revealed that since he began his driving career in 1991, he has never been involved in any form of road accident until one faithful dawn when he was carrying out his duties.

Speaking to JoyNews’ Seth Kwame Boateng, Mr Ofori narrated that on February 7, 2007, his long-standing record of zero accident got broken at Nsawam highway which resulted in the amputation of his leg.

According to him, he was driving one of Ghana’s famous Intercity buses [VIP] from Sunyani to Accra with 31 people on board when a long truck veered into their lane and hit the bus.

“There was a mortuary by the road with big gravels deposited in front of it. My vehicle landed there and I lost control. All the passengers rushed out but I couldn’t my leg had got strapped under the driving seat,” he said.

About four hours after the crush, Kwame was left to his fate with his left leg stuck in the wreckage of the car bleeding profusely while the passengers who suffered various scores of injury screamed in pain..

“I sat quietly on my seat while I bled profusely, about 20 military men were among my passengers. They stood by me and continuously poured cold water on me to revive me any time they saw I was giving up.

“A personnel from the fire service came and they still could not release my leg so they tried to pull the side of the car that had trapped my leg. As soon as they did that I realised there has been a problem. I could not feel my leg anymore,” he narrated.

By the time they reached the hospital, his left leg was dead and had to be amputated from above the knee.

In spite of his traumatic situation, the 39-year-old Kwame received no compensation from his car owner or the insurance company.

The Hotline Documentary, ‘Crushed’ highlighting the plight of road ictims and its impact as far as road traffic accident and its cost to the country will premiere on JoyNews on Monday, April 12, 2021.