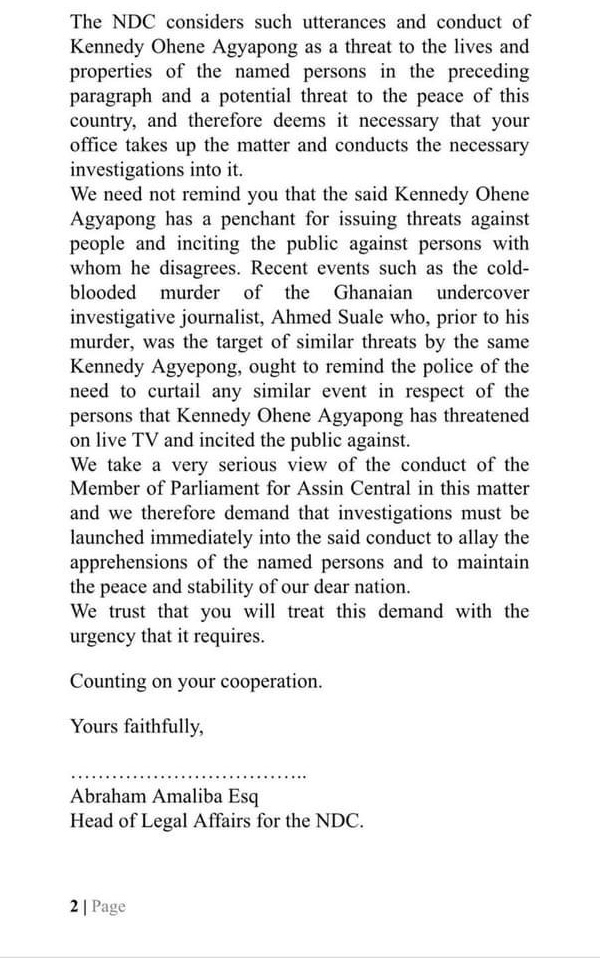 The National Democratic Congress (NDC) has demanded that the Criminal Investigations Department (CID) of the Ghana Police Service investigates Kennedy Ohene Agyapong for threats issued against some of its members.

The party says the Assin Central MP on his Madina-based Net2 TV threatened to have the properties of certain members of the NDC burnt.

The NDC said it considers such utterances and conduct of Mr Ohene Agyapong “as a threat to the lives and properties of the named persons.”

It said the legislator’s action is a “potential threat to the peace of this country, and, therefore, deems it necessary that your office takes up the matter and conducts the necessary investigations into it.”

It added, “We need not remind you that the said Kennedy Ohene Agyapong has a penchant for issuing threats against people and inciting the public against persons with whom he disagrees.”

According to the NDC, recent events such as the cold-blooded murder of undercover investigative journalist, Ahmed Suale who, prior to his murder, was the target of similar threats by the same Kennedy Agyepong, “ought to remind the police of the need to curtail any similar event in respect of the persons that Kennedy Ohene Agyapong has threatened on live TV and incited the public against.”

The party said it has taken “a very serious view of the conduct of the Assin Central MP in this matter and we, therefore, demand that investigations must be launched immediately into the said conduct to allay the apprehensions of the named persons and to maintain the peace and stability of our dear nation.”

It concluded, “We trust that you will treat this  demand with the urgency that it requires.”