Military will be phased out from police operations — Ambrose Dery 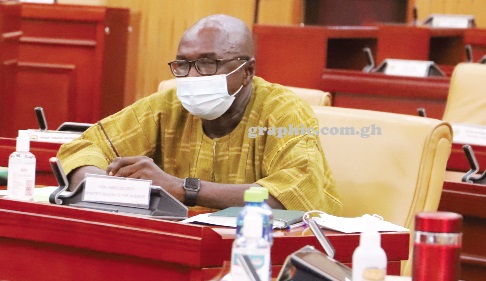 The Minister-designate for the Interior, Mr Ambrose Dery, has indicated that the Ghana Police Service will soon phase out military presence in its operations.

He said the government was working to resolve some capacity challenges facing the police, and that once that was done, the presence of the army in police operations would be completely phased out.

Mr Dery said this when he appeared before the Appointments Committee of Parliament (ACP) last Tuesday.

There have been some complaints with regard to the huge military presence in police operations in some parts of the country in recent times, especially during the 2020 elections.

Mr Dery, however, gave an assurance that the police were competent and motivated and would soon be operating completely without support from the military.

“This is why in the fight against galamsey the military has now withdrawn and the fight has been left for the police,” he said.

“I expect that Parliament will continue to support efforts to resource the security agencies. I agree we should let the soldiers go back and play their traditional roles,” the minister-designate added.

Mr Dery also gave an assurance that the culprits involved in the murder of the investigative journalist, Ahmed Suale, would not be let off the hook.

However, he said, the limited technological challenge was hampering the progress of the case, adding that foreign experts had, therefore, been invited to help solve it.

The minister-designate also indicated that the government had started a process to intensify border patrols following the outbreak of Ebola in Guinea.

He said Ghana currently had over 200 unapproved routes along its borders which needed critical attention in order to prevent the importation of the disease into the country.

He noted that the Ghana Immigration Service (GIS), together with other security agencies, would secure the borders against any such outbreak.

“The outbreak is a matter of concern to the government and we will ensure that the needed resources are provided for officers of the GIS to prevent the outbreak in Ghana.

“We need to work hard to ensure that Ebola doesn’t come here, and I am committed to making sure that we protect our borders as much as possible. That is why we are building the capacity of the GIS.

“But at the end of the day, we still need some technology to help us, and I think that above all, we need support from the people. That is why we are building good relations with the people at the borders,” he said.

On the issue of police welfare, Mr Dery indicated that the Police Administration had sought the intervention of the Psychology Association of Ghana to deal with the recent upsurge in suicide cases among police officers.

Within a space of three weeks, three police officers have allegedly committed suicide.

The Minister-designate for the Interior indicated that the Police Administration had also instituted full-scale investigations into the incidents to establish whether or not they were true suicide cases.

Additionally, he said, he had tasked the Police Administration to set up a counselling unit to meet the counselling needs of policemen who might be going through personal psychological and emotional challenges.

“I have tasked the Police Administration to strengthen its Counselling Department to extend counselling services to policemen. I have also asked the administration to increase the deployment of religious leaders, including pastors and Imams, to all the district police commands to offer counselling,” he said.

The nominee also assured Ghanaians that the police were still in control, despite the spate of armed robberies across the country.

“We are determined to fight armed robbery; it doesn’t matter the number of cases recorded: the measures put in place to resolve them is the most important thing,” he said.

The government, he disclosed, had deployed combat patrols along the highways to curb the increasing rate of robberies.

He said one initiative his ministry would work on was the ‘Northern Security Project’, which would help in the Northern Region, explaining that the deployment would include service personnel from the GIS, with support from the military.

”What I must admit is that the criminals change their modus operandi from time to time, but I can assure you that, going forward, we will find a different scenario,” Mr Dery said.