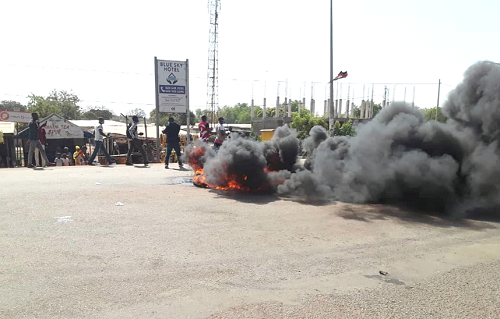 Hundreds of supporters of the National Democratic Congress (NDC) in the Upper East Region have called on well-meaning Ghanaians, institutions and international bodies to bring pressure to bear on the Electoral Commission (EC) to ensure justice by re-collating the results of the December 7 presidential polls.

That, they noted, would ensure that the EC paid attention to the democratic tenets of the country and also ensure that “proper collation and declaration of the 2020 election results were done”.

The placard-bearing NDC supporters made the call when they staged a peaceful demonstration on the principal streets of Bolgatanga yesterday to register their displeasure at the declaration of President Nana Addo Dankwa Akufo-Addo as winner of the December 7 polls.

The placards were with inscriptions such as “We need justice”, “Akufo-Addo stop forcing yourself on us”, “Upper East will not recognise Akufo-Addo as President” and “EC my mandate is for Mahama not Akufo-Addo”.

As they marched through the streets of the municipality, the NDC supporters, some of whom wore red bands, also burnt vehicle tyres at almost every intersection on the streets, in spite of warnings from the police to them not to engage in that act.

Led by the former Member of Parliament (MP) for Talensi, Mr John Tia; the Second Vice-Chairman of the NDC, Chief Sofo Azorka, and the Regional Secretary of the NDC, Mr Donatus Akamugri, the demonstrators further marched to the regional office of the EC to present a petition to the EC.

When the police again tried to prevent them from entering the premises of the EC, they (the supporters) did not agree and pushed their way through the gate and entered to deliver their petition.

The petition, which was signed by Mr Akamugri and copied to the Regional Director of the EC, Mr William Obeng Adarkwa, among other things, entreated members of the National Peace Council, Council of State, religious bodies, traditional rulers, civil society organisations (CSOs), the European Union (EU), the African Union (AU), the Economic Community of West African States (ECOWAS) and the United Nations to prevail on the EC to adhere to the electoral laws of Ghana.

The petition further intimated that the NDC in the region held two press conferences, one during the collation on December 8, this year and the other on December 9, this year on the figures churned out from some media outlets which “were full of irregularities”.

Additionally, after the “illegal declaration of the results by the EC chairperson, the NDC painstakingly audited all the pink sheets in the various constituencies and discovered more infractions in most constituencies but for the sake of time we will mention just a few”.

The party enumerated some of the constituencies where the numbers were allegedly doctored in favour of the NPP as Navrongo Central Constituency, Talensi, Bawku Central and Bolgatanga Central.

It further expressed misgivings about some violent acts that occurred in the Talensi and Tempane constituencies and entreated the security agencies to bring the perpetrators to book.

“In conclusion, the rank and file of the NDC in the Upper East Region stand by His Excellency John Dramani Mahama and the National Executive that we will not concede defeat until the EC proves with evidence that John Mahama did not win the 2020 general election,” the petition stressed.

Messrs Tia, Azorka and Akamugri later told the Daily Graphic that everything pointed unequivocally to the fact that the December polls were “rigged in favour of the NPP, hence it must be looked into again.”