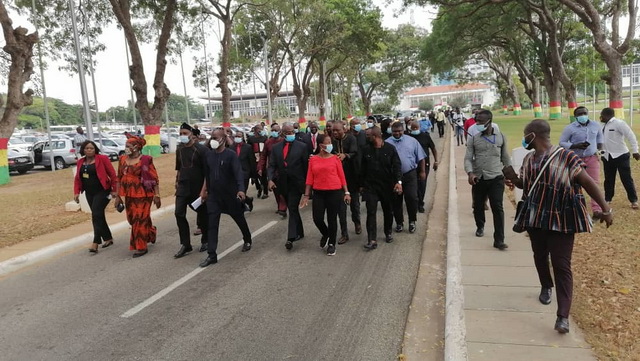 The opposition National Democratic Congress has served notice it will not sit quiet over “the travesty of justice” that threatens to deny its parliamentary candidate for Techiman South in the 2020 general election, Christopher Beyere Baasongti the right to represent the people of the constituency in parliament.

At a press conference Tuesday, the Minority Caucus in Parliament said a simple collation of all polling station results in the constituency shows Beyere won the seat by 293 votes, polling 50,306 votes against the ruling New Patriotic Party’s Martin Kwaku Korsah’s 50,013.

Deputy Minority Leader James Klutse Avedzi who presented the party’s tally of the votes said there were 128,021 eligible voters, with as many as 919 ballots being rejected.

The Electoral Commission has recorded Korsah as the winner of the parliamentary seat but the Minority maintains there has not been any collation of the constituency results and wondered by what method the EC came to that conclusion.

The Minority Leader Haruna Iddrisu, who had earlier in the day led his colleagues in a failed march to petition the Electoral Commission over their rejection of the declared presidential results as well as the Wenchi South parliamentary results, said a correction of the error gives the NDC a working majority in parliament instead of the 137 seats apiece recorded by the EC.

The police prevented the Caucus from proceeding to present their petition to the EC on the grounds that it had not been served prior notice.

According to Haruna, should the “error” in the EC’s results be corrected, the NDC comes up with 138 seats and the NPP 136, and whichever side the independent parliamentary candidate for Fomena, Andrew Amoako Asiamah chooses to align with does not matter.

Three persons have so far died from shooting incidents associated with attempts to collate the results, and the Minority Leader Haruna Iddrisu maintained that since the disruption of the process, no collation has taken place, saying it explains the inability of the EC to publish the constituency results and challenged the media to produce a copy if ever the EC issued one.

“Let anybody from any media house share with me their evidence of a copy of certified collated results for Techiman South …. This is shameful to the EC of Ghana. You conduct elections and two weeks into it, neither the candidate nor his representatives or the NDC as an interested party can boast of an official copy of the outcome of that election”, he said.

The Minority in the petition it was taking to the EC demanded that the EC “cause to be collated the Techiman South Constituency Parliamentary and Presidential Elections Results from all the Two Hundred and Sixty-Six (266) Polling stations in accordance with the law, with immediate effect”, as well as amend the endorsed writ, gazette notification and notice to Clerk of Parliament accordingly to reflect the true state of affairs pursuant to regulation 43 (2) of C.I. 127.