The Africa Centre for Integrity and Development (ACID), an Africa-based anti-corruption and good governance advocacy Civil Society Organisation, has awarded John Kumah, Chief Executive Officer of the National Entrepreneurship Innovation Programme (NEIP), as the Most Outstanding Integrity CEO in Ghana.

In a citation accompanying the award, ACID said, “it has carefully observed the NEIP CEO’s performance and conduct as the CEO of NEIP, and has unanimously approved that, he receives ACID-AFRICA’s most prestigious and maiden annual integrity excellence award (pubic service sector), as a reward for his proactive and good corporate governance acumen.

The citation also said, the award was being presented to the NEIP CEO for his business-oriented leadership, hard, honest and dedicated work, that has gotten several thousands of Ghanaians trained as entrepreneurs to impact various sectors of Ghana’s economy.

It also noted that, “We have followed with keen interest your managerial acumen that has articulated the NEIP-Presidential Business Support Programme, into a huge success story, offering nineteen thousand (19,000) Ghanaian start-ups and small businesses, an opportunity for funding to support their businesses.”

The citation of honour also stated that, John Kumah has created avenues for businesses in the area of technical support and training, mentorship, business advisory services and a well-structured incubation and accelerated business growth programmes through the existing private incubation hubs across the country.

ACID commended John Kuamh for providing selected businesses with seed capital and a digital access to an online marketing platform to enable them showcase their goods and services globally.

The group also commended the NEIP CEO for his proactive efforts and diplomacy to link Ghanaian businesses to foreign investments and partnerships through the organization of his proposed global entrepreneurship summit in Ghana. 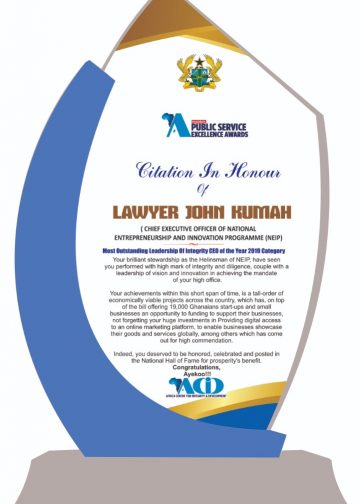 “Your commitment to national property, your tenacity of purpose, your integrity and unquenchable desire to see Ghana transformed into an economic super-power in the sub-region, warrant an award and a celebration of your great exploits” ACID stated in its citation of honour.

In another development, the Chief Executive Officer of the National Entrepreneurship and Innovation Programme, John Kumah has also been recognized by the Voiceless Media and Consult for deepening the culture of entrepreneurship among the youth of Ghana at a brief ceremony in Accra.

Presenting a certificate of honour and a Personal Accident Insurance Cover of up to GHS40,000 for a year, from the Best Assurance Company to the NEIP CEO, Chief Akilu Sayibu of the Voiceless Media, praised the Business Development Ministry and the NEIP for their entrepreneurial support to the youth, who hitherto, would have been unemployed to the detriment of the country.

According to a research by the Voiceless Media and Consult, the NEIP, under John Kumah, has trained about nineteen thousand (19,000) start-ups in Ghana within two years, and funded about 4,350 of them with capital ranging from Ghc10,000 to Ghc100,000 to not only start their own businesses, but to also offer employment for others through the establishment and operation of their businesses.

This, the Voiceless Media, sees to be profoundly good and a step towards poverty alleviation in Ghana, hence the honour, to serve as a motivation to him and other actors occupying similar positions.

The Voiceless Media also commended the NEIP for initiating across Senior High Schools and Universities, the culture of entrepreneurship, saying, this module of the NEIP, would inculcate into the youth, huge entrepreneurial sense at the early stages and described it as very encouraging.

Chief Akilu Sayibu during the presentation said, his monitors and researchers have discovered that, under John Kumah, also a private legal practitioner, the NEIP has facilitated the setting up of one of the biggest greenhouse estates in West Africa at Dawhenya in the Greater Accra Region.

This, according to the Voiceless Media, was most commendable and deserved recognition.

Receiving the honour, John Kumah, who is also an aspiring Parliamentary Candidate of the NPP for the Ejisu Constituency, thanked ACID and the Voiceless Media for the honour done him, and said, he was dedicating the awards to all staff at the NEIP, explaining that, the recognition was for all of them for their hard work and not for him alone.

He said the recognition would inspire them to do even more for the NEIP.

Present at the two ceremonies were the leadership of ACID and members of the Voiceless Media and Consult led by Chief Akilu Sayibu and some staff of the NEIP in Accra.

Thief falls asleep during operation in a TV presenter’s house

Manual system hasn’t returned to the ports with UNIPASS – GRA...