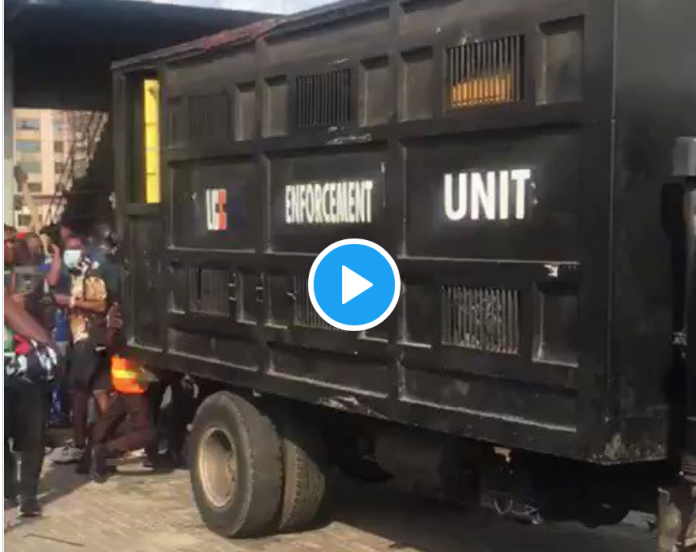 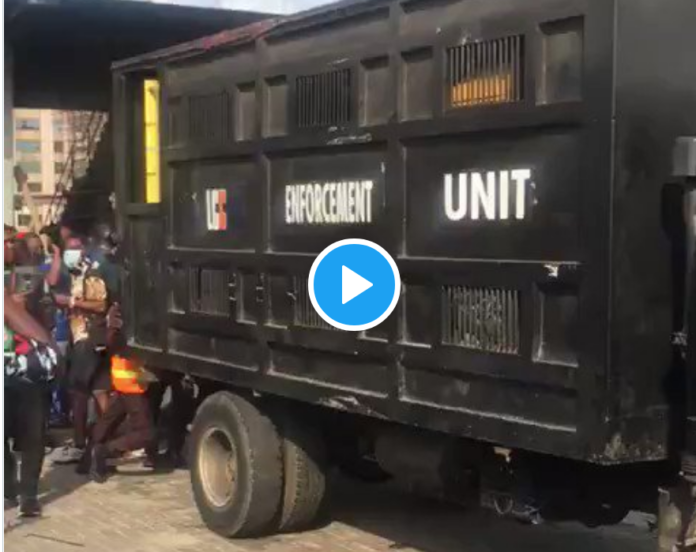 Nigerian security forces have detained at least 12 people following protests over the reopening of the Lekki toll gate in Lagos on Saturday.

The toll plaza was the scene of a fatal shooting of unarmed protesters by Nigerian soldiers on October 20.

The facility had been shut since the night of the shooting, but a judicial panel — set up by authorities to investigate reports of police brutality and the violent crackdown of #EndSARS protesters by the army — recently voted for its reopening.

Supporters of #EndSARS have disapproved of the panel’s decision. Many view the reopening of the tollgate as ill timed and inconsiderate to victims of the Lekki shootings.

An increased security presence was visible at the Lekki toll gate in Lagos on Saturday.

A CNN team at the scene witnessed a group being taken to a police truck amid a heavy police presence.

“We have the right to tell our fellow citizens who are not doing what is right that what they are doing is wrong. We must not lose our courage to speak in the face of oppression and brutality,” Damilare Adenola said from the barred window of a police truck.

Adenola said he had come to the protests on Saturday to show support to the organisers and observe the demonstrations but was arrested when he refused to identify himself.

“I told them I’m not going to lose my right to protest even if I’m jailed — I’ll still speak because it is my fundamental human right,” he added. “This was where our oppressors trod upon our fellow compatriots — fellow young people.”

He continued: “We felt that this place should be made a museum — a museum of resistance and not a money-making enterprise. People were killed here, so many people are in hospitals — their lives have been spoilt.”

Several individuals at Lekki toll gate were taken into custody Saturday and placed in police vehicles.

Another two people, who were arrested, appeared at another window of the police truck and told CNN that they did not know why they had been taken into custody.

“I was picked up for no reason. No interviews, nobody talked to me. I was only apprehended while walking on the street,” said Emmanuel Oboji, a construction worker. “I don’t know what happened. I was picked up because I was walking in my country.”

The Nigerian government earlier this week urged sympathisers of the #EndSARS movement to shelve plans for the renewed protests at the site.

The heavy show of force from police appeared to have deterred protesters from gathering Saturday.

Only a few demonstrators had arrived at the site at the protest’s scheduled start time. Police clamped down heavily on the protesters who did show up by beating them with sticks before arresting them and confiscating #EndSARS posters.

The SARS unit was set up in 1992 to fight armed robbery and was given wide-ranging powers. Many of the officers did not wear uniforms or name tags and there were numerous complaints that they had turned on the citizens and were perpetrating the very crimes that they were set up to combat.

Nigeria’s Inspector General of Police announced in October that SARS would be dissolved and its officers redeployed, but protests have continued.

Following the October 20 incident, a CNN investigation found members of the Nigerian army and the police shot at the crowd, killing at least one person and wounding dozens more. The army denied any wrongdoing but made many shifting statements about how it engaged with the peaceful demonstrators that night.