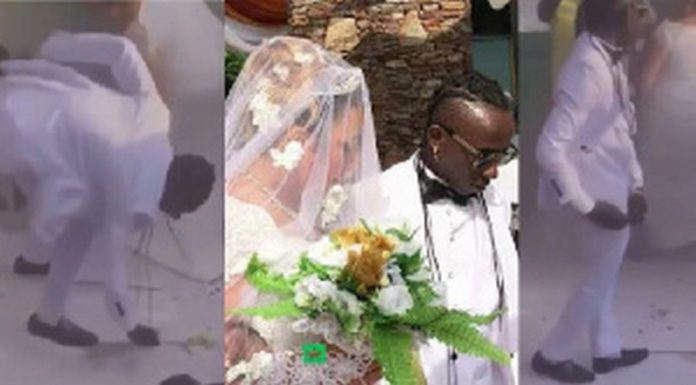 Barely two weeks after tying the knot with his German lover, one Corner’ hitmaker ‘Patapaa’, has taken steps to learn his wife’s native language.

The duo tied the knot in a colourful ceremony at Swedru in the Central region on January 2, 2021, an event which visuals have got many people talking.

In a video that has emerged online, the singer, known in private life as Justice Amoah, was seen struggling with his beginner lessons.

Though his wife, Liha Miller Amoah was making all efforts for him to get the basics, they were obviously not on the same level.

Mrs Amoah started with numbers as she counted her currency notes in front of her husband to help him familiarise himself with them.

No matter how hard she tried, Patapaa kept mispronouncing the figures.

Liha took to her Instagram page to share their progress with fans and followers who have since commended her on the efforts so far.

In what appeared as a ‘frustration’, she captioned the video ‘Me Teaching My Husband @patapaa_amisty My Language But I Guess I Have A Long Way To Go 😂😂 Might Post The Full Video Soon 😊.