Photograph of human skull, bones tendered in as evidence 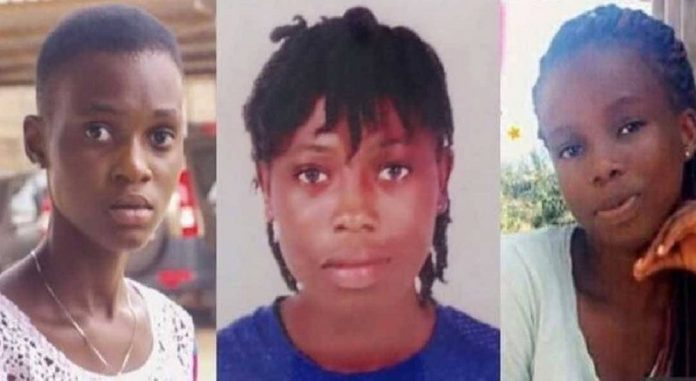 The prosecution team at the trial of the kidnapping and murder of four Takoradi girls at the Sekondi High Court on Tuesday, tendered in evidence a photograph of a human skull and bones retrieved from a tablet belonging to Samuel Udoetuk Wills, the accused.

This was when the Chief State Attorney, Miss Patience Klinogo, cross-examined suspect Wills, who on Monday, led by George Essiful-Ansah, opened his defence.

Suspect Wills and John Oji, second accused, both Nigerians, are facing trial in connection with the kidnapping and murder of four girls, Ruth Quayson,18, Priscilla Blessing Bentum, 21, Priscilla Koranchie, 15, and Ruth Abekah, 18, who got missing between August 2018 and January 2019.

They have both pleaded not guilty to eight counts of conspiracy and murder.

Miss Klinogo asked the accused about a photograph found in the gallery of his phone, showing a pregnant woman with a baby sticking out of her abdomen with blood oozing all over her.

Counsel for Mr Wills, George Essiful-Ansah, objected to the question, and argued that the pictures were not part of evidence, but the court, presided over by Justice Richard Adjei-Frempong, overruled the objection and explained that the exhibit was in evidence with all its content.

Mr Wills told the court that he did not have such a picture on his phone, and did not know how it found its way onto his phone, adding that the gadget had been in the custody of the police since his arrest.

Miss Klinogo pointed out to Mr Wills that in his statement, he mentioned his friend, John Oji, second accused, as the one, who conspired with him to kidnap two of the missing girls, Priscilla Bentum, and Ruth Love Quayson.

The judge said in 2019, DNA tests proved that the skeletal remains found at Nkroful in Takoradi were those of Priscilla Blessing Bentum, 21, Ruth Love Quayson, 18, Priscilla Mantebea Koranchie, 15 and Ruth Abeka,18, who were captured at different locations in the Sekondi-Takoradi metropolis.

The court said that the medical report from pathologists also proved that the skeletal remains were those of the four kidnapped girls.

The bill of indictment also showed the two accused persons agreed to act together and that they caused harm and that their acts were unlawful.

Justice Adjei-Frempong mentioned that the testimony of the prosecution witnesses, investigation, interrogation, Facebook chats, itemised calls bills, a statement by suspects Wills and Oji, photos and videos, led the court to be satisfied that the accused had a case to answer and rejected Mr Oji’s alibi of being in Nigeria at the time of the crime.