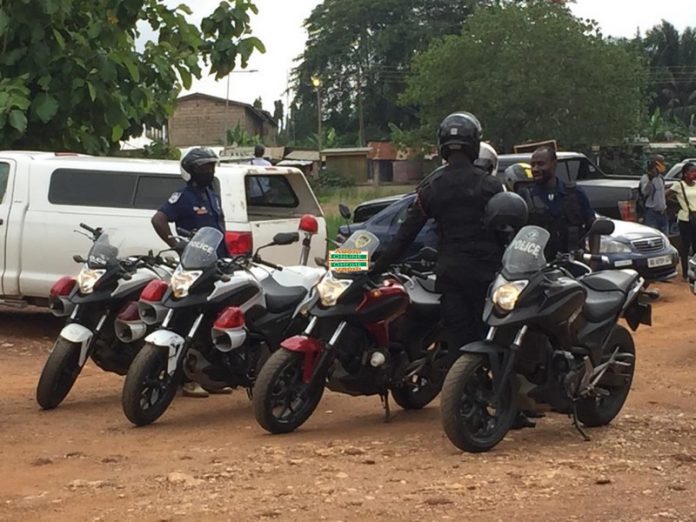 The Ghana Police Service is pursuing all suspects identified to be involved in violent activities, including the discharge of firearms during the December 7, 2020 presidential and parliamentary elections.

The move formed part of the resolve of the police to bring finality to all election-related violence cases.

This was made known by the Director General of the Criminal Investigation Department (CID) of the Ghana Police Service, Commissioner of Police (COP) Mr Isaac Ken Yeboah, when he updated journalists on violent incidents recorded by the police during and after the elections.

The cases under investigations were the shooting of some jubilant supporters of the National Democratic Congress (NDC) in Savelugu by unknown gunmen, shootings in the Ablekuma Central Constituency, rioting and shooting incident in the Odododiodio Constituency and the firing of guns at the Techiman South Constituency collation centre.

COP Yeboah said the police had commenced investigations into the cases and would work hard to ensure the prosecution of all perpetrators.

In Odododiodoo, he said five suspects alleged to have shot into a crowd of jubilant supporters of the New Patriotic Party (NPP) had been arrested and put before the Adjabeng District Court in Accra.

The suspects, charged for possessing arms and ammunition without lawful authority, were remanded in police custody and would reappear in court on December 21, 2020.

Thirty-two other suspects who were arrested for damaging an NPP-branded vehicle have also been put before the same court.

They pleaded guilty and have since been granted bail by the court to reappear on February 3, 2021.

During investigations into the shooting incident which led to the death of two persons identified as Emmanuel Dompreh, 36, and Botwe Tackie,16, the police retrieved a pump action gun with cartridges and two pistols with ammunition.

Other items retrieved from the suspects included pepper sprays, a machete, jackknives, kitchen knives and a ballistic vest.

The CID head said efforts were ongoing to arrest one of the suspects identified only as Bruno, who had been on the run.

With regard to the shooting incident at the Ablekuma Central Constituency, the CID Director General said a national security operative, Collins Quarcoo, who fired his side arm indiscriminately at the collation centre, injuring three persons including a policeman, was arrested by the police on duty at the centre.

One of the injured persons has died.

The suspect had since been put before a Circuit Court in Accra and remanded in police custody, with the next hearing fixed for December 24, 2020.
COP Yeboah said in another incident in the same constituency, police investigations established that a stray bullet, fired by a soldier who was yet to be identified, hit two persons.

He said the incident which took place at the Odorkor Police Church which served as a collation centre for the Ablekuma Central Constituency happened when some people started pelting officials of the Electoral Commission and other persons at the centre with objects.

He explained that the stray bullet was from warning shots meant to ward off attacks from a mob.

The two victims were taken to the Korle Bu Teaching Hospital but one of them, identified as Abass Ibrahim, died on December 16, 2020.

“Investigations are underway to identify the military officer who fired the warning shot,” said Mr Yeboah.

COP Yeboah said the chief of Duko in Savelugu, Duko Naa Mohammed Ahmed, and two others have been arrested in relation to the shooting of a 12-year-old girl, Zakaria Samira, and three others when some supporters of the NDC were jubilating after the elections.

He stated that police investigations had revealed that the shooting emanated from the office of the parliamentary candidate of the NDC, Alhaji Iddrris Yakubu, and that the weapon used was an AK47.

A joint military and police operation led to the retrieval of an AK 47 rifle with two magazines loaded with 40 rounds of ammunition, and a G3 ammunition with a cartridge from the chief of Duko.

When the team searched the office of Mr Yakubu in his absence, another AK 47 rifle with two magazines loaded with 60 rounds of ammunition were found.

Mr Yeboah said Mr Yakubu had failed to report to the police even though he had been invited while the chief of Duko had been put before the Tamale Magistrate Court.

The court granted the chief GH¢100,000 bail with two sureties.

Taking a look at Techiman, the Director General said the police were hunting for the persons behind the shooting incident which injured eight men at a collation centre in the Techiman South Constituency.

He said an unknown person from the crowd fired a gun and security persons at the centre fired warning shots to disperse rioters following a disagreement of election results during the collation of the results.

Two of the victims, identified as Tajudeen Mohammed and Abdallah Ayarek, were pronounced dead when they were taken to the Holy Family Hospital in Techiman.

“The police are still investigating to determine the perpetrators of the crime,” Mr Yeboah said.

In a related development, 30 protesters who were arrested during a demonstration by some NDC supporters on the premises of the Electoral Commission last Thursday, were yesterday granted bail of GH¢10,000 with one surety each by the Accra High Court.