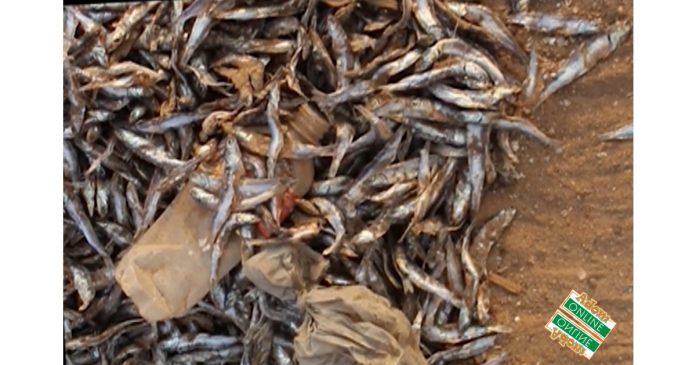 A popular fish, consumed by many in Ghana, is sadly prepared in very unhygienic environments such as refuse dump, on the bare floor with sand and swept with broom before it gets to the market and the unsuspecting final consumer.

Abobi (Anchovies), also known as Keta-school-boys, is one of Ghana’s most popular fish brands. Abobi is mostly identified with the people of the Volta Region because of the cuisine of the people known as ‘Akple and Abobi Tadi’.

It is also prominent in many households across Ghana because it’s widely classified as ‘healthy and nutritional’ and it is believed it has no fat.

Abobi, is also widely recommended by midwives to be blended into powered form and used as protein for babies’ first solid meals.

There are two types of Abobi: The brown one (smoked) and the silver coloured one (white).

Despite the respect the fish commands in markets and in households, the scene of the production site of Abobi at Tema Newtown is distasteful, horrifying and shocking.

At a first glance, you will mistake this activity to be communal labour where women have gathered at an open space to sweep and clean, but that is not the reality when you get closer. They are not sweeping garbage as it appears, they are sweeping something meant for the stomach.

Even when sweeping is not actively taking place, you will see a sight which looks like an untidy ground waiting to be swept; a sight surrounded by open gutters and rubbish.

A closer walk gives a clear picture of what exactly seems like garbage from a distant, it is the white Abobi, produced on bare floor, sharing the space with piles of garbage, fowls, goats and humans.

From the information gathered, they are dried on the ground for two days. During this drying period, they are left on the bare floor without being covered even during rains. Hence, the fish as well as the piles of garbage have the rainwater running on the floor across each other.

Although the smoked ones are equally dried in the sun before being smoked, the fish mongers do so by spreading the fish on the smoking sheets before arranging them on the floor under the sun. These sheets are relocated to the fire for smoking to commence.

One of the producers of the Abobi, who didn’t want her name mentioned, explained why they dry them on bare floor.

Another producer, who gave her name as Josephine but didn’t want her face shown, demonstrated how the fish is processed to be packaged for sale in the markets.

According to her, they have not thought of the health implications of their production process. According to her, although it is possible to dry the fish on other surfaces, the final product won’t come out as beautiful as those spread on the floor do, adding that spreading the fish on the bare floor is the mode they have used over the years and have become used to that.