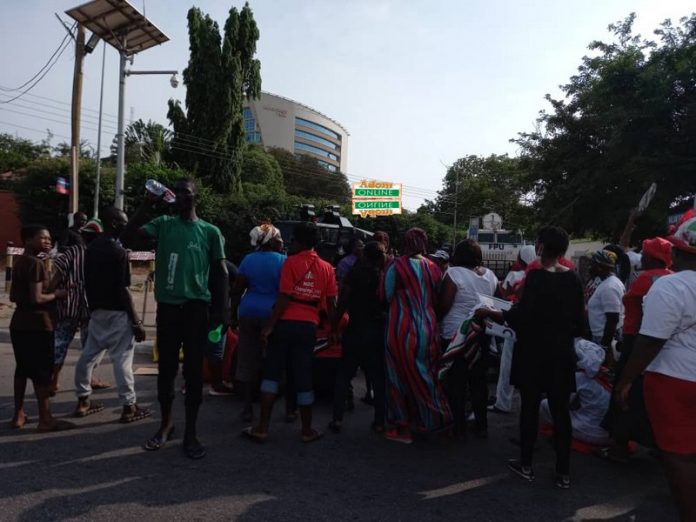 The Adjabeng Court has granted bail to some supporters of the National Democratic Congress (NDC) arrested for unlawful assembly at the Electoral Commission’s (EC) office.

They were arraigned on Friday after the Accra Regional Police Command on Thursday arrested them for besieging the EC’s office.

Lawyer of the supporters, Francis Xavier-Sosu, speaking in an interview with Joy News, disclosed about 30 persons were involved.

He said he was in court with five other lawyers for the accused because they were fighting for the NDC’s course though they could not immediately confirm they were all supporters.

“We cannot immediately confirm if they are all our supporters because most of the people who were taken to court today were innocent by-standers while those who were aggressively rioting are nowhere to be found,” he lamented.

Lawyer Sosu noted he cannot confirm if Thursday’s protest was sanctioned by any authority in the party, adding these are spontaneous reactions from rank-and-file following the outcome of the election.

However, he assured the party is taking stringent measures for its members to remain calm while they undertake peaceful protests which is their constitutional right.

They thronged major streets leading to the EC office, amidst the burning of car tyres, pelting stones and causing heavy vehicular traffic and congestion.

The protestors were demanding that the EC rescinds its declaration of the New Patriotic Party’s Presidential Candidate, Nana Akufo-Addo as the President-elect for the 2020 presidential election.

According to them, the National Democratic Congress’ John Dramani Mahama is the rightful winner of the December polls and should be declared as such.