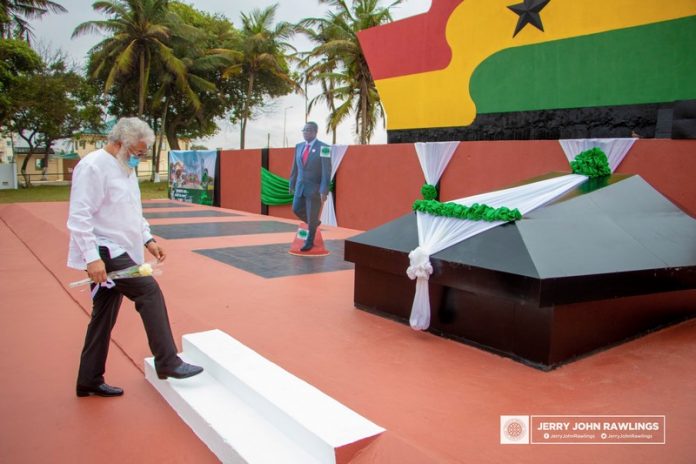 The Paramount Chief of the Tefle Traditional Area in the Volta Region, Togbe Nakakpo Dugbaza VIII, has made an appeal to the family of late former President Rawlings over his burial.

According to him, the deceased, while alive, once expressed the desire to be buried on his property at Tefle, hence the need for the family to fulfill that.

“The man loved water and rivers. One time he told me he does not care if he could be interred on the Island at Tefle.

“But I dissuaded him saying that if the spillway of the dam is opened the water table might change thus affect his remains,” Togbe Dugbaza VIII said.

He acknowledged that though Mr Rawlings was not strict about his words back then, the family could work with that information.

“In this vein why don’t you consider laying him to rest on his property at Tefle which lies at the Volta River Bank,” he added.

The Paramount Chief’s revelation was contained in a statement addressed to the funeral committee, family members, children as well as the widow, Nana Konadu Agyemang Rawlings.

Meanwhile, the final burial rites of the late Statesman, which was initially scheduled from December 20, 2020, has been postponed indefinitely.

This is due to concerns raised by members of the Agbotui family who say they distance themselves from the funeral arrangements.

“We wish to inform the general public that no such consultation has taken place, and as such the former press release confirming the date of his [J.J. Rawlings] funeral should be disregarded,” the family said in a statement.

Mr Rawlings died on Thursday, November 12, at the Korle Bu Teaching Hospital in Accra after a short illness.