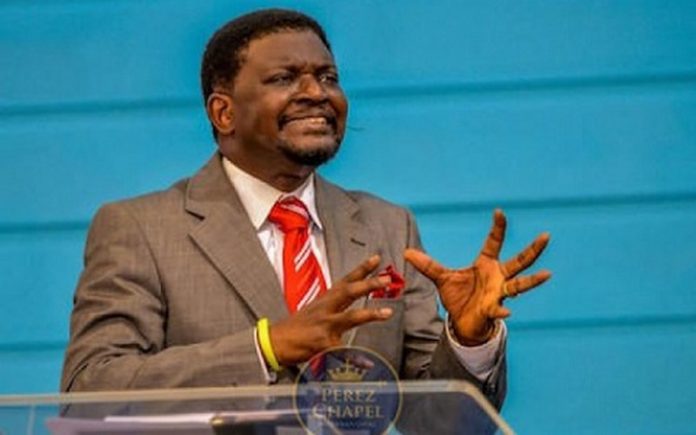 Founder of Perez Chapel International, Most Rev Charles Agyinasare, is hoping President Nana Akufo-Addo will reduce the number of ministers in his government.

In his view, a small country like Ghana having more than 80 Ministers of State at the presidency is a waste of resources.

In a 10-point note to the government during his sermon on Sunday, December 20, 2020, Rev. Agyinasare maintained that the number of ministers in the next government must reduce.

“A small country like ours that is always having a budget deficit and looking for foreign aid to balance our budget should not have more than 80 ministers, otherwise, it would be a waste of our resources. There should be a significant reduction of the staff in the Flagstaff House,” he suggested.

Read Agyinasare’s letter to President Akufo-Addo:
These are things I have been talking about for some time now, but I think it’s important to reiterate this FOR THE INCOMING GOVERNMENT.

Know that after the second year, we would ask for accountability on the things stated.

1. Security of civil and public service

That they would deliver to us a civil and public service that is non-partisan and staff would have security of service.

The government should give us credible & visible reports we can all see of the completion of projects started by past governments being completed and used.

The affordable houses built by previous governments must be completed and used (either by our teachers, nurses, police etc).

That tribal politics would not be upheld any longer in our body politic.

4. No more reckless spending by the government

The government would not spend our monies recklessly by incurring judgement debts and excessive borrowing.

Ghanaians want prudent use of our scarce national resources.

A small country like ours that is always having a budget deficit and looking for foreign aid to balance our budget should not have more than 80 ministers, otherwise, it would be a waste of our resources.

There should be a significant reduction of the staff in the flagstaff house.

5. Same rules apply for all

6. No more politics of insults

Our government should stop branding critics as opposition elements and unleashing its attack dogs on those who criticize her because we want the best for our country.

7. Be swift to fight corruption.

When there are allegations or exposés of corruption, it should be properly investigated, findings made public, and those culpable brought to book.

8. Other pillars of society appreciated

That the political class would not sideline the other pillars of society. (every-thing in this nation can’t be politics. If we sideline the other pillars of society and make everything political, then when even our football team plays, politicians would take the glory and also of the fall for their performance. When court cases are won or lost, politicians would be held accountable. When people commit a crime it will become political. Eventually, ordinary citizens like you and me would be the victims.)

9. Freedom of speech and expression

That they would ensure that our democracy allows us freedom of speech and we would not be afraid to share our opinion. (our constitution guarantees freedom of speech, but we must strive to build a nation where people don’t feel intimidated for sharing their opinions. There are lots of people who say they don’t want to talk simply because they would be insulted and slandered.

It’s more dangerous when political actors make it seem that non-political ac-tors cannot and should not say anything even when there is a cause, because they must be for either one party or the other.

Over the years, I have met brilliant Ghanaians in and outside this country who are doing wonderful things for other nations and yet they tell you they don’t want to be part of this nation because once you talk, criticise or do something, you would be branded and dealt with. We all don’t need to be politicians to speak our minds about the nation’s direction.

10. We need a strong and responsible opposition

To God be the glory.

Merry Christmas and get ready for a faith filled 2021.