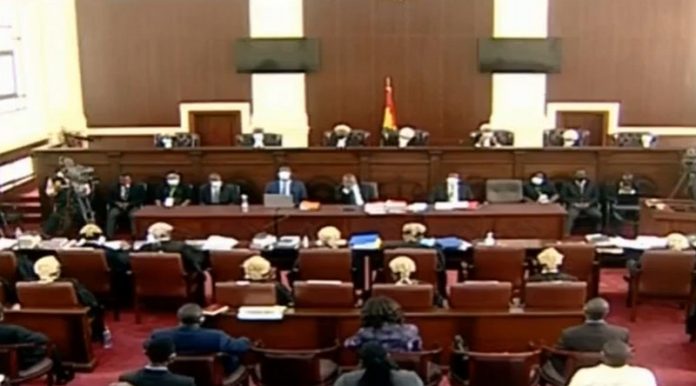 The Supreme Court has ruled that the Chairperson of the Electoral Commission (EC), Mrs Jean Mensa and Peter Mac Manu cannot be forced to testify in the ongoing Election Petition hearing.

The apex court made the ruling on Thursday, February 11, 2021, on the back of an application filed by lead counsel for the EC, Justine Amenuvor and that of President Nana Akufo-Addo, Akoto Ampaw who asked for permission not to call any witness.

Chief Justice Kwasi Anin-Yeboah, who read the ruling, said they were not convinced by the contrary argument made by Tsatsu Tsikata, lead counsel for the petitioner.

They insisted that the evidence put forth by the petitioner, John Dramani Mahama, does not meet the burden of proof, thereby, making it unnecessary to put a witness for a counter case.

“We are reminded to state that our jurisdiction invoked in this election petition is limited jurisdiction clearly circumscribed by law. We do not intend to extend our mandate beyond what the law requires of us in such petitions brought under article 67 clause 1. Simply put, We are not convinced and will not yield to the invitation being extended to us by the counsel for the petitioner to order the respondents to enter the witness box in order to be cross-examined.

“Accordingly, we hereby overrule the objection raised by the counsel for the petitioner against the decision of the respondents declining to adduce testimonies in this petition”, the Chief Justice said.

Below is the summary of ruling:

The court framed the issue  for determination as whether or not respondents can be compelled to give evidence.

Court holds that Witness statement does not constitute evidence until the witness enters the box and takes the oath to indicate reliance on it.

No provision in the constitution or statute has been pointed out to show the EC chairperson is subject to different rules contrary to settled rules of procedure and settled practice.

A petitioner’s case stands or fails on the strength of the case not evidence from respondent.

Cases referred to like the Sakande one are distinct from present case.

Court cannot compel a party to give evidence.

Court says there is no such law that empowers it to compel a witness to testify.