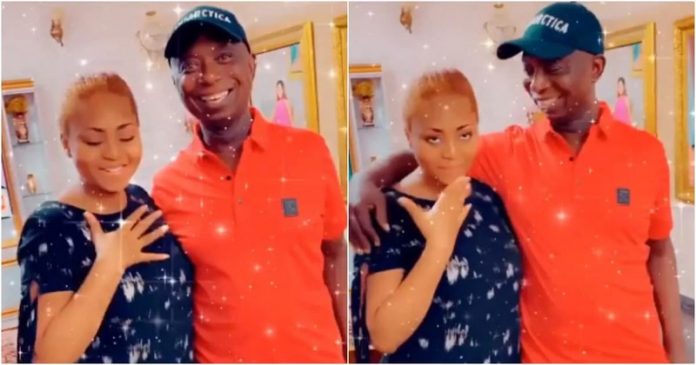 Billionaire businessman and former member of the House of Representatives, Prince Ned Nwoko, has raised alarm over alleged plan to take his life and that of his wife, Regina Daniels.

Mr Nwoko, at a press conference in Abuja on Thursday, accompanied by Mrs Daniels, said he had alerted the Nigeria Police Force and the Department of State Services.

He linked the threat to the ongoing struggle for kingship in his native community in Delta State and tussle over a piece of land on which he plans to build a private university.

According to him, the kingmakers have settled the kingship matter while allocation of the land to him followed due process.

The petition, a copy of which was made available to journalists, was addressed to the Inspector General of Police, dated November 12, 2020, received on November 17, 2020, and titled ‘Leaked Information on Dangerous Plans to Attack/Kill Me.’

The petition read in part, “Kindly recall the issue of the land which was duly allocated to me by my community (Idumuje-Ugboko, Aniocha North Local Govt. Area, Delta State) upon which I am building a private University of Sports – first of its kind in sub-Sahara Africa.

“I was reliably informed by my wife, Regina Daniels, who was also informed by one Wale Jana that the suspects, who were arrested and remanded at the Kuje Correctional Centre in connection with the murder case in my village, are plotting to cause me harm and possibly kill me.

“According to the report sent to my wife by Wale Jana, it said an inmate in the same room with the suspects at the correctional facility, who pretended to be sleeping, heard them plotting to harm me by conspiring with others outside the prison yard.

“I hereby produce a copy of the chat received which has given rise to my fear. l am confident that you will treat this matter with the seriousness and urgency it requires. I also believe you will provide adequate security around me and members of my family, following this recent evil plot to cause me harm.”

The politician said he was forced to cry out in the media after the whistle-blower died mysteriously shortly after his release from prison, even after reporting the threat to security agencies.