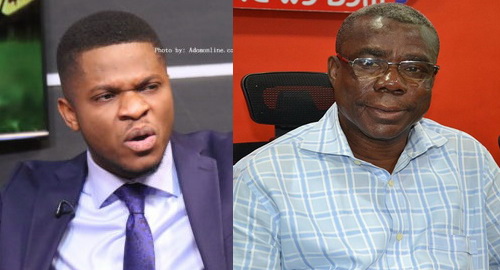 National Communication Officer of the opposition National Democratic Congress (NDC), lawyer Sammy Gyamfi says his party is not the only one alleging fraud in the December 7, 2020 presidential polls.

The New Patriotic Party is alleging same, which he says raises questions about the credibility of the polls results as declared by the Electoral Commission.

His comment follows assertions by New Patriotic Party Election 2020 Campaign Manager, Peter Mac Manu, to the effect that the Electoral Commission credited NDC flagbearer, John Mahama with more votes than he actually got.

“We believe, and will prove in Supreme Court that even John Mahama did not receive the number of votes that have been credited to him. We’re going to show that during the course of the trial”, Mac Manu is reported to have told Joy News Wednesday night in response to the Election Petition filed by the NDC and its flagbearer.

To Mac Manu’s assertion Sammy Gyamfi responds in a tweet on Thursday, saying it is perhaps only in Ghana that both victors and vanquished accuse the Electoral Commission of fraudulently aiding the opponent.

Sammy Gyamfi in another write up explaining the party’s petition to the Supreme Court, says it is about the unconstitutionality of the actions of the Electoral Commission and the wrong votes it credited the two leading contestants in the polls, President Akufo-Addo and former President John Mahama.

Below is the write-up in full.

On the matter of the 2020 Election Petition filed by HE John Dramani Mahama:

2. The results of the 2020 Presidential elections were declared by the Returning Officer, Jean Mensah on 9th December. Per the content of the said declaration, none of the Candidates got more than 50% of the Total Valid Votes as required by the Constitution, i.e taken into account her assumption on Techiman south. Fact is, if all votes in Techiman South were added to the votes of candidate John Mahama, Candidate Akufo Addo would have dropped below 50%. The EC Chairperson and retuning officer, Jean Mensah lied when she said in her declaration that even if all votes in Techiman South were added to the 2nd Candidate, John Mahama, the first Candidate, Akufo-Addo will still obtain more than 50% of Total Valid votes. Her own declaration doesn’t support this claim.

3. Also, Percentages allocated to the names of the candidates in the 9th Dec. declaration were wrong. The sum total of the percentages is 100.3%, a clear mathematical and statistical impossibility.

5. The next day after the declaration, 10th December, the EC posted a press release on their website claiming that the returning officer made a mistake by using Total Votes Cast in her declaration instead of Total Valid Votes and purported to rectify this alleged error. The so-called press release was not signed by the returning officer who made the declaration. In fact, it was not signed at all.

6. Also, the unsigned press release didn’t make any reference to the Total valid votes figure the returning officer is alleged to have gotten wrong in her declaration of 9th Dec. Rather, it made reference to another figure, hence cannot be described as a true and proper correction of the alleged mistake the returning officer made in her declaration of 9th December.

8. More importantly, article 63(9) requires the EC to pass the outcome of the Presidential election into law (Constitutional Instrument) and gazette same. The EC passed the declaration of 9th Dec., which it admits was in error (per the unsigned press release) into law (Declaration of President Elect Instrument, CI 135) and gazetted same. The unsigned press release of 10th Dec. that purported to correct the 9th Dec. declaration is neither part of CI 135 nor was it gazetted. Rather, it was the declaration of 9th Dec. that the EC admits was in error that was passed by CI 135 and gazetted.

10. To make matters worse, the new total valid votes figure capriciously and whimsically introduced by the EC’s unsigned press release of 10th Dec. to purportedly correct the alleged mistake the Returning Officer committed in her declaration of 9th Dec. was done without the involvement of agents of the candidates as required by law. No one has seen the basis of that new total valid votes figure nor the new votes allocated to the names of the candidates. This is a gross violation of articles 23 and 296 of the 1992 Constitution in the opinion of the Petitioner.

12. The NDC is asking the Supreme Court to set CI 135 aside on grounds of unconstitutionality, as the winner declared therein didn’t obtain more than 50% of the Total Valid Votes as required by article 63(3) of the 1992 Constitution.

And what’s the NPP’s response to this serious constitutional issue? That the NDC committed curable typographical errors in its petition? Hahahaha! 😂😂😂

NB: it is important to make the point, that the NDC’s case is about fictitious figures declared by the Returning Officer of the 2020 Presidential Election in violation of the 1992 Constitution and not mere typographical errors committed by her. Hence, there is absolutely no basis for equalization.

Need I say more? Can’t you see where this matter is going?

Well, while we wait for the EC’s answer to our petition, all I can say is that Tsatsu Tsikata Esq. is a genius. Kudos to all the lawyers who worked with him in crafting this Petition.

Now can the NPP file their answer to the Petition and stop issuing useless press releases?