Shoppers, traders make last-minute efforts to cash in on the festivities 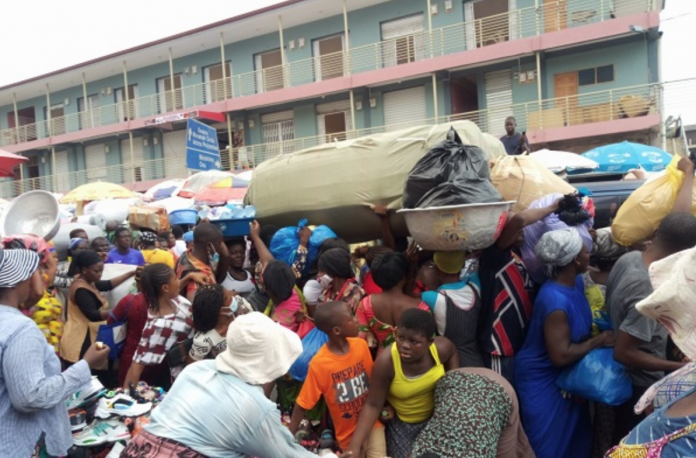 As the days inch closer to Christmas, the human and vehicular traffic situation at most city centres, particularly Accra and Kumasi, is worsening, as shoppers and traders make last-minute efforts to cash in on the festivities.

Roads leading to the CBDs of the cities are choked with vehicular traffic that is becoming frustrating for drivers and commuters alike.

A trip that would usually take an hour to complete now takes as long as four hours, compelling passengers, who are unable to deal with the situation, to get off the vehicles to continue on foot, especially if they are not too far from their final destinations.

At various points, officials of the Motor Traffic and Transport Department (MTTD) of the Ghana Police Service are seen doing their best to regulate the heavy traffic for smooth and safe movement.

When commuters eventually manage to get to the CBDs, they are confronted with human traffic, as many more people are going there to shop, with the situation being compounded by the limited space to move about, as traders have taken over the pavements to do business.

In the markets and in some of the business areas that the Daily Graphic visited, some people were seen tightly clutching on to their bags as they tried to manoeuvre their way through the congested area.

In Accra, Felicia Kwarteng reports that some drivers who spoke to the Daily Graphic expressed frustration over the situation, although they admitted that it had become an annual ritual which was getting worse every year.

“It seems every year people from the small towns and villages all come to Accra to shop and the situation gets worse as the festive time approaches; and it is getting worse each year.

“It is the right of people to come to town to shop, but I think there should be a way of dealing with the traffic. Today, I have barely done two trips, and that affects business,” a driver who plies between Mallam and Accra told the Daily Graphic.

Another driver who plies the Kasoa-Accra route, also talking to the Daily Graphic, attributed the heavy traffic to the malfunctioning of some traffic lights and the impatience of drivers.

“Because some of the traffic lights in town are out of order, some drivers take advantage of the situation and drive without recourse to order. Also, due to the heavy traffic, some drivers stop in the middle of the road, and that too creates the traffic congestion. As a solution, I think more policemen must be deployed to help check and ease the situation,” he said.

The overwhelming human presence at the markets and the CDBs was yet to fully translate into brisk business, some traders told Daily Graphic reporters Rejoice Lavina Eklu & Augustina Dzodzegbe.

While some of the traders said sales were picking up, others said they were yet to experience an increment in patronage, and blamed the situation on a number of factors.

They were, nonetheless, hopeful that things would pick up as the festivities drew closer.

Some of the traders who had earlier complained that sales were slow, despite the presence of many people in town, now said sales and business were picking up.

Rabiatu Mohammed, a seller of whole-grain products at the Accra Central Market, in an interaction, said: “Almost immediately after the elections, sales were quite low; however, from the latter part of last week up to the weekend, sales have been quite good, as people are stocking up for the Christmas.”

Mr David Yeboah, who sells various food items, expressed worry about the massive increment in prices, which he attributed to the rate of import duties.

“Patronage is currently slow, compared to last year, but we hope things will pick up from 24th, since Ghanaians like to do last-hour shopping,” he added.

Mrs Philomena Ayivi also lamented about the low patronage of soft drinks, which usually sold faster during this time of the year, blaming it on the increment in prices.

“Most of these drinks move fast, but people are not buying them as we expected,” she said.

Frozen proteins are not left out of the increment in prices.

Mr Samuel Yeboah, the owner of a cold store, said although prices had gone up, demand for some particular products was high.

A carton of frozen chicken was GH¢94 some weeks ago but it is currently GH¢110.

The high demand for cassava fish has contributed to the price increase from GH¢85 per carton to GH¢130 now.

A clothing and shoes vendor, Ms Afia Antwiwaa, told the team that so far people had come around to do window shopping.

“When they come and ask for the prices, they say they will return, but they never do,” she said.

She was, however, hopeful that things might become better, explaining: ”This year has been tough and people are also waiting for their salaries, so maybe by December 23 and 24, they will come in a last-minute effort to get things.”

In Kumasi, Emmanuel Baah reports that the city centre is almost at a standstill, as vehicles, traders and shoppers compete for space.

The items mainly patronised include foodstuffs, clothing, decorative and fancy accessories, as well as toys for children.

Wares are strewn everywhere in the streets, with vehicles also parked at almost every available space, making movement difficult.

Meanwhile, the situation has presented greater opportunities for thieves.

However, the new Kejetia Market is a ‘no-go’ area for burglars, perhaps because of the numerous security guards stationed on the premises, aside from the many surveillance cameras at vantage points within the market.

At Adum, the entire area between the Kejetia Traffic Light and the Unicorn House has been taken over completely by mobile phone dealers and second-hand cloth sellers.