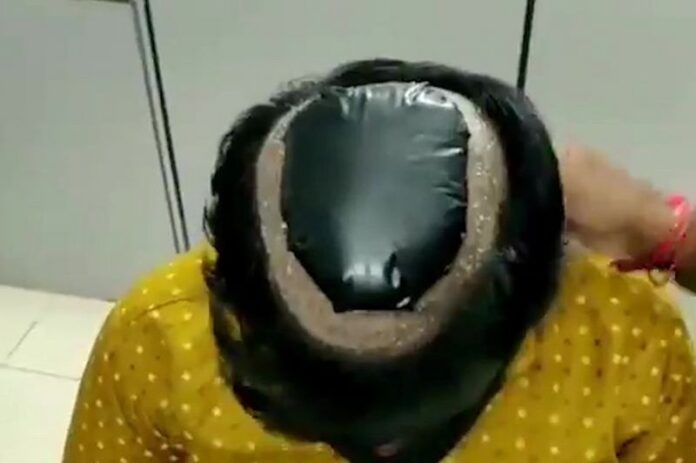 Two men were caught trying to smuggle gold and cash through an airport underneath their wigs.

Eagle-eyed customs officer stopped the pair as they tried to leave, because of their ‘suspicious hairstyles.’

On closer inspection, officials quickly discovered that gold paste packets weighing 698 grams had been hidden in the fake hair.

Peeling back the wigs revealed black packets filled with cash and gold that had been glued to the men’s heads.

Gold was also found stashed in their socks as well as their rectum.

The money and chunks of gold were pictured laid out on the counter as the crooks looked on red-faced.

Magroob Akbarali and Zubair Hassan Rafiyutheen were both later arrested in the terminal after arriving in Chennai, India, from Dubai.

Air Customs officials said they had seized gold and foreign currency worth a total of $382,943, or of £278,000, from southern India’s Chennai International Airport on March 21.

In a statement, officials reportedly said that at Chennai airport in the last two days a total of 5.55 kilograms of gold had been seized from passengers arriving from and departing to Gulf countries.

The gold was hidden in various ways including under wigs, in passengers’ socks and in their rectum.

Six people in all have been arrested for trying to smuggle in gold.

Earlier on Saturday, a 24-year-old man named Anbazhagan of Villupuram, was reported to have also been caught at the Chennai airport’s exit.

On searching him, four packets of gold paste — weighing 1.5 kg — were recovered from his socks and stitched inside his underwear.

In another case, Indigo Flight 6E 66 was searched and eight gold bars with foreign marking weighing 933 grams were said to have been found inside a cloth bag hidden in a hollow pipe under the seat of the aircraft.