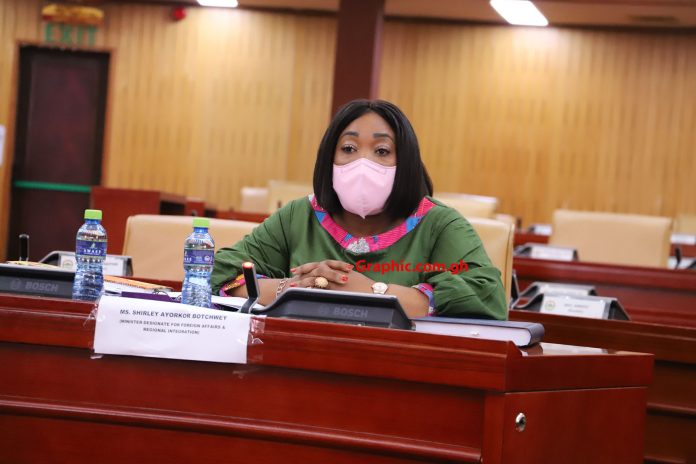 The Ministry of Foreign Affairs and Regional Integration has created a Candidature Unit to ensure that more Ghanaians are appointed to regional bodies such as ECOWAS and African Union (AU).

The Minister-designate for Foreign Affairs and Regional Integration, Ms Shirley Ayorkor Botchwey, who disclosed this last Thursday, said the unit would scan all international agencies to find out the positions available and who the country could put forward for those vacancies.

“Ghana spends a lot of money on ECOWAS, AU and all the international organisations that we belong to and yet we do not have many people serving with those organisations. One of the reasons, I found out, is that Ghanaians don’t have a second language so they do apply and when it comes to the shortlisting, they are left out.

“If you give me the nod, I will make an impact in that area to ensure that Ghanaians and women get positions in international organisations,” she said.
Ms Botchwey was answering questions at the Appointments Committee of Parliament as part of his vetting for the ministerial appointment.

Ms Botchwey noted that the revenues of the Ministry of Foreign Affairs had been dealt a huge blow, following the suspension of some services across all the country’s embassies and consulates across the world due to COVID-19.

She said for a year now, the ministry had been struggling with revenue mobilisation due to the suspension of some consular services such as visa and passport applications.

The Minister-designate stated that in some consulates, they had to reduce the number of hours that the staff work.

Ms Botchwey said the decision was arrived at because it became unsafe for its staff to work and also because most of the countries went into lock down for long periods.
She said the embassies and consulates, however, offered the services on emergency basis.

“When it comes to passport and visas, they are in direct contact with the people so unless it is absolutely necessary we have ceased these services. Unless the applicant can assure us and show proof that the service that is needed is an emergency service,” she stated.

Ms Botchwey also said the decision of ING Bank to close the accounts of the Ghana Embassy in Brussels was a decision that came as a surprise to the ministry and till now the bank had not given any reasons for the action.

“The account of embassies, usually, apart from the inflows of compensations and goods and services and in cases where they have accounts that receive visa and passport fees, nothing else goes through them. So it came as a surprise to us.

“At some point, we even wanted a joint mission of parliament and the ministry to go to Brussels to find out, but unfortunately because of COVID-19, we could not embark on that mission. But the bank has come back to us to say that it has the right to disengage from the customer and they have no responsibility to give reasons to the customer,” the Minister-designate said.

Ms Botchwey, who occupied the same ministry in the previous government, said to satisfy herself, she asked for the bank statement for all the accounts that were run by the mission, going back three years.

“We have painstakingly gone through every transaction and there is absolutely nothing untoward, so I am wondering what could have been their reason,” she explained.

Answering a question on a report from the Auditor General which pointed out that the ministry was engaged in what it described as uneconomic rent payments, she said, the country had 58 embassies and nine consulates around the world, making it impossible to buy all its office buildings.

The Auditor General in its report indicated that between September 2017 and September 2018, about $5.2 million, €1.9 million and 129 million CFA were disbursed as rent for residences, chanceries and residential accommodations of home based officers of 33 missions.

Ms Botchwey admitted that for many of the countries, Ghana’s embassies would remain there for a very long time to come and it was important that the country found permanent ways of ensuring that cost effective operations.

“It is for this reason that when I took over as minister in 2017, I was very happy to find GH¢50 million from Societe Generale that was to be used for purchases, construction and also for rehabilitation of our missions abroad.

“Properties are very expensive and, therefore, the GH¢50 million is almost exhausted and yet we still have a lot of embassies that are renting their chanceries as well as residences not just for the ambassadors but also for staff.

“My first way of dealing with it will be to find some more money to outrightly purchase all our properties abroad and renovate them to make sure that they are fit for purpose,” Ms Botchwey stated.