Home Politics You make people who know nothing about issues before courts insult judges...
Politics 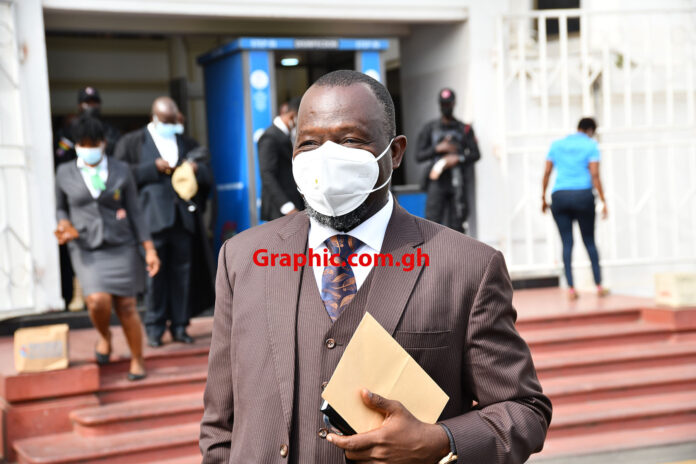 A Justice of the Supreme Court, Justice Yaw Apau says some members of the public tend to insult judges without knowing the issues before the judge or the courts for determination.

To him, when members of the public without legal education engage in such practices, “if they are not lawyers, we [judges] don’t care.”

But if lawyers rather engage in such practices, then it is worrying, Justice Yaw Apau said whilst advising Dr Dominic Akuritinga Ayine who had been cited for contempt and had appeared before the Supreme Court Monday afternoon [February 22, 2021].

The Supreme Court initiated contempt of court proceedings against Dr Dominic Ayine who is a Member of Parliament for Bolgatanga East for a comment he passed against the judges sitting on the ongoing 2020 presidential election petition.

Last Tuesday [Feb 16] after the court held that the petitioner could not reopen his case, Dr. Ayine in a media interview specifically stated that the judges had a “pre-determined agenda” against former President John Dramani Mahama who filed the petition.

Dr Ayine said he did not understand why the court dismissed Mr Mahama’s application to reopen his case to enable him to subpoena the Chairperson of the Electoral Commission (EC), Mrs Jean Adukwei Mensa, who was the Returning Officer of the December 7, 2020 Presidential Election.

The Supreme Court took judicial notice of his comment, cited him for contempt and subsequently summoned him for the quasi-criminal process.

Appearing before the bench on Monday, February 22, 2021, Justice Apau said, “I will say something small because Dr Ayine is a friend and a brother to me.”

“They are two different things because I know when politicians mount the witness box, they say anything at all and at the end of the day, when they are recorded, they come to deny. I have been a politician before, I know how it is,” Justice Apau said.

“If they are not lawyers, we don’t care, because if you don’t want to be insulted, you cannot be a judge but if you are a lawyer, who knows the law and who knows the procedure and then you talk in a manner that does not speak well of you as a lawyer, it gives opportunity to non lawyers to also talk or say worse things. So that is my advice to you [Ayine] as my brother,” Justice Apau advised .

The Chief Justice, Justice Kwasi Anin Yeboah said: “Dr Ayine, please you have been summoned here by this court to show cause why you should not be committed for contempt.”

The Chief Justice said on February 16, 2021, “you [Ayine] made certain statements that were very, very scandalous of the court.”

“We’ve exercise restraint in invoking our jurisdiction to always be committing people for contempt for obvious reasons. The other time, I think you were here when I drew the attention of Mr Frank Davies, lawyer [Yaw] Oppong, then Marietta [Brew Appiah Opong], the learned former Attorney-General, I drew their attention and they stopped. But then from nowhere, you also jumped unto the fray and you made certain scandalous statements which the bench thought it was least expected of somebody who held a very high office, as the leader of the bar when the Attorney-General was not present.”

That of Mr Frank Davies and Mr Yaw Oppong were in reference to they granting media interviews on the case whilst they will still part of the legal teams in the case, representing the second respondent, President Nana Addo Dankwa Akufo-Addo, which the court drew their attention to the fact that their action were in breach of the professional ethical rules.

That of Marietta Brew Appiah Opong was related to publishing something the court said was “calculated or likely to a material degree to diminish or be prejudicial to the public confidence in the administration of justice.”

Dr Ayine said he had already written a letter to the Supreme Court apologising for his comment.

“My Lord Chief Justice, I did say those words, my attention was drawn to the fact that I might have crossed the line by Mr Frank Davies and your lordships, on advice and consultation with my counsel, I have written to the court rendering an unqualified apology. I delivered that letter this morning to the registrar of the Supreme Court to bring it to your lordships attention.”

The Chief Justice said they have received copies of the letter and have circulated it and are comfortable with the apology, “but we want to make certain consequential orders.” for the comments he made to the media on February 16, 2021 to the effect that the court had a “pre-determined agenda” to rule against the petitioner.

To purge himself of contempt, the court ordered Dr Ayine to use the same medium he made the contemptuous comments to render an unqualified apology and a retraction.

When he appeared, Dr Ayine apologised to the court by himself and through his lawyer, Mr Frank Beechem, a former President of the Ghana Bar Association (GBA).

He said he has realised the error and admits he is wrong and had been wrong and deeply regrets the harm done to his profession and the disrespect shown to the court and Ghana.

He therefore rendered an unqualified apology to the Supreme Court, was sorry for what he has done, remorseful and deeply regrets, his counsel Mr Frank Beechem prayed the court.

Following that, the Supreme Court ordered that Dr Ayine should purge himself of contempt by rendering an unqualified apology and a retraction following his public comment deemed ‘scandalous of the court’ on the very same medium before Thursday”, February 25, 2021 when the court will reconvene.

The contempt proceedings has been adjourned to Thursday at 9:30am.

After the court proceedings, Dr Ayine repeated his apology in a media interview at the Supreme Court premises.